The Truth about Fiction 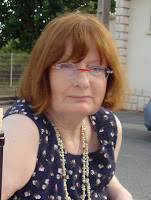 I was in the writers group with Theasa Tuohy as she wrote and rewrote and wrote again ‘The Five O’Clock Follies’, her debut novel of the Vietnam War from the viewpoint of a female correspondent with her boots on the ground. The writing is so visceral and detailed that through freelance journalist Angela Martinelli, you stew in the caldron of Saigon — benumbed by the boredom of waiting for the next lead, then dropped into the chaos of the Tet Offensive and the Seige of Khe Sanh.
Amazingly, Ms. Tuohy did not experience the War first hand: you’d not think that from her narration.
– Robert Knightly 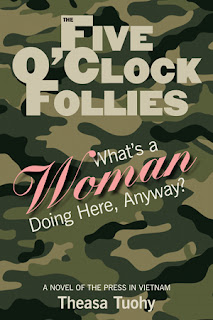 This business about truth is confusing. Novels should be truer than life? Heightened reality? I spent my early working life as a daily journalist, and truth was truth and facts were facts. And anyone who strayed from that was soon on the carpet, or more likely out the door. Or should I say, anyone who got caught. So when I began struggling to write my first novel – set in Vietnam, of all places – I did one whale of a lot of research. I didn't have to research the main character's dilemma: She was a journalist in the late 1960s trying to prove to the all-male cast of characters that she could do the work. I'd been there done that, all I had to do was teach myself about Vietnam and the "American" war. And as I got rejection after rejection on my early novelistic attempts, I couldn't grasp the meaning behind the comments.

They all were a variation on the same theme: The setting, the characters were mesmerizing, spellbinding, couldn't-put-it-downable. So why didn't they want to buy my book? Because the story didn't work.

I had a hard row to hoe, to figure out how one makes fiction real, breathing of life, yet … what's that extra magic ingredient? At one point, my novel, published this month as "The Five O'Clock Follies," was called "How the Weather Was." I guess I'm into obscure titles, no one knows what "Follies" means either. That's what the reporters in Saigon called the 5 p.m. daily press briefings held there by the military. The "Weather" title came from Hemingway: "All good books are alike in that they are truer than if they had really happened … the people and the places and how the weather was."

That's what I was trying to do: Let the reader get a feel, know what it was like to be under fire one minute and drunk at the Continental Bar the next. How the weather was for an unsung hero with notebook and pen or camera. Someone who wasn't drafted, could go home whenever he or she wanted, but was inexplicably there anyway.

I journeyed to a writers workshop one summer at "Sewanee," the University of the South, because Tim O'Brien (“Going After Cacciato”) was there. I didn't find my answer to what was wrong with my "story," but did get a pink T-shirt with an O'Brien quote printed in black on its back: "Just because it never happened, doesn't mean it isn't true." He later said that he never said that, or was misquoted, or something, but I've still got the T-shirt. And am still trying to puzzle out how to answer the question of what is "true" fiction. I think I've learned the answer in my bones, or typing fingers, perhaps, but still not at all clear how to articulate it.

"Follies" is totally historically accurate. The reporter in me made sure of that – the date of every battle, the number of bullet holes in the fuselage of a C-130 limping back from the siege of Khe Sanh, the view from the window of the Givral Cafe across the street from the Continental Hotel. I still have the creased and crumpled copy of a map of 1968 downtown Saigon. I photocopied it from "Big Story," a 529-page tome published by Yale University Press written on a grant by a former newsman, Peter Braestrup. He basically set out to document that the press had caused the loss of the war for the U.S. by overreacting during the Tet Offensive. I didn't realize until sometime later that I was reading the abridged version. Gad, one can only imagine how detailed the two volumes must have been.

I only point this out as documentation that I very well did my research. I read everything I could get my hands on about the war. Strange thing, no one had written fiction about the press and what their daily lives were like. The fiction was all written by grunts, by GIs. The press detailed their experiences as memoir, or reporting. If nothing else, I have filled a hole, a fictionalized account of those undocumented scribes. When I finally travelled to Vietnam some years later to double check my research, I had a bit of a set-to with a guide. When he pointed out what he said was the Opera House, I blurted out without thinking how rude it sounded: "No, that's not the Opera House, it's the National Assembly building." Fortunately, we'd been touring together for several days, and he knew my mission, and just laughed. "You might be right," he said, "that's probably what it was in 1968. But I'm too young to remember."

One critic, Charlene, said: “I had a hard time believing this was a fictional book, as the writing and detail were so great."

I've heard it said that you can't teach talent, I don't know about that. But it's clear to me that it took a long time for me to learn what makes a news "story" different from "true" fiction. I've since finished a second novel and begun a third. It feels like I've finally grasped the concept.