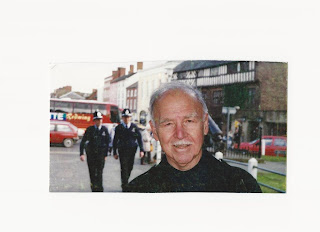 The greatest joy, for me, of being an active member of MWA/NY is the people I meet.  Jerry is one of them.  He is one of our few dramatists.  He has a list of credits, which typed in an 8 pitch font, would be longer than your arm.  It includes a lot of radio, TV, and stage plays including the books for musicals.  Take a look here at his impressive credentials, just for Broadway: 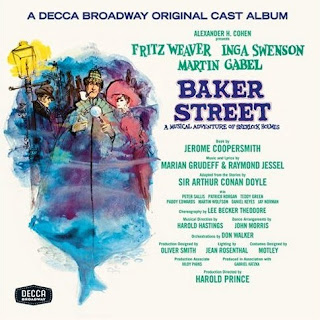 I had to visit three websites to get even an inkling of the breath of his accomplishments.  And right now, rehearsals are on for a new one act mystery play--"Pipe Dream," which will have its premier at the National Liberal Club in London on May 16th, under the auspices of the Sherlock Holmes Society.  It's about a tough New York detective who is stumped by a crime and visits the Sherlock Holmes pub in London, where he is led to the solution by a renowned ghost from the past.

Today Jerry regales us with the story of how he once wrote historical playlets for the budding medium of television.

In the days when television meant snowy pictures that you might improve by wrapping aluminum foil around your antenna, I had a job as an assistant to an early TV producer.  My job was to help him put on a quiz show in which viewers tried to stump a panel of brilliant teenagers on the subject of American history.  If you submitted a question that was used, and you stumped the wunderkinds, you won a set of Encyclopedia Americana – not a bad gift – 30 volumes with genuine leather bindings and gold imprint on the spines.   The trouble was that most of the questions sent in by the audience were not worth a damn, much less 30 volumes, so who do you think dreamed up the questions that were used?   We didn’t dare tell the sponsors or the TV station execs that Jasper LaRoche of Wilbur, Wisconsin and Pastor  Neumiller of Boise, Idaho were really Jerry Coopersmith of West 68th Street.  As a result, the floor of my office was littered with sets of encyclopedias still in their packing boxes.

One day, I tried to persuade my boss to change the format of the show just a little.   I proposed, “Instead of asking questions allegedly from the viewing audience why don’t we put on a short dramatization of an historic event, and base the questions on that?”

“You mean – with actors and costumes and everything?”

He loved the idea.  Then he asked something I hadn’t thought of.
“Who’s going to write the dramatizations?”

My reply was not an act of courage.   I would have done anything to stop those  encyclopedias from taking over my office, but I honestly believed that the  playlets would make the show more entertaining.  In addition, I did have some experience in dramatic writing, but it was limited to a one-act play I had written in college with the collaboration of two other students.  My boss accepted that as a major credit, and starting the following week I was the author of one short teleplay per week based on American history.

Although they were limited to one set and two actors to keep the cost down, they worked beautifully.  In a small TV studio we depicted moments aboard Columbus’ ship, on Jefferson’s estate, and in Benjamin Franklin’s home when he tried to dissuade his son from going to war on the side of the British.  We were able to get top-notch actors because Hollywood was in a slump at the time, and many of the movies’ finest were flocking to New York hoping to get their feet wet in the new medium.
Writing those playlets I learned how to create characters, not just for history plays, but for all sorts of dramas including mysteries that I would be writing in times to come.   And I learned that I enjoyed telling stories using only the actions and words of characters, rather than my own narrative skills.

There are two questions you must ask yourself if you hope to become a dramatic writer.  One, do you love it – to the extent that you don’t mind staying up nights to rewrite a scene, or a play if necessary.  Two, are you good at it – not just in your own opinion, but in the evaluation of others.  My response to both has been supported by the fact that I’ve been able to make a living for myself and my family as a writer in TV and theatre.

Today, many years after “Americana Quiz”, I still run to an unfinished scene as often as I can to write the lines of dialogue that may be needed.   And I still enjoy it immensely.