How I Cured My Ailing Main Character

Donna Huston Murray, author of Cured, offers us another post today, reposted from her web site at www.donnahustonmurray.com.
The ride from Philadelphia to Ithaca, NY, feels especially long in bad weather. I spent the time with a yellow tablet in my lap playing with names for a Pennsylvania farmer’s daughter who would become a cop. As the main character of my new suspense series, I might need to live with the name for years to come—if I should be so lucky. Before my husband and I arrived at the Thomas Farm B&B, the birth certificate read, “Lauren Beck.” Who she was remained to be seen.

For November games Hench usually spirits me up to the press box where he does radio for the University of Pennsylvania football. That day, rather than cramming into the booth with the guys, I was invited into Cornell’s adjacent VIP lounge. There I laid about as low as an antelope in a lion den until I heard a woman talking about a recipe for pumpkin-pecan pie. With Thanksgiving coming I couldn’t resist. As usual, the recipe did me no good whatsoever–unless you count meeting the prototype for my new alter-ego. 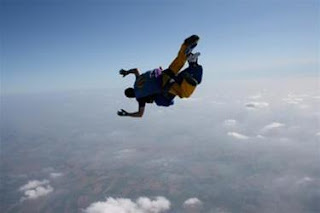 After being cured of an illness that had her in and out of an iron lung for several years, Carol Brentlinger gave sky-diving a go–about forty-three times. She fed sharks underwater, and, as a colonel in the Commemorative Air Force, flew retired WWI bombers for fun. Her bravery awed me. What a fabulous heroine she would be!

Sadly, my then agent disagreed, and sadly she was more right than wrong. Readers ride on a character’s emotional coattails. Since Lauren Version One feared nothing, the tension I was working so hard to inject into CURED went unnoticed. I didn’t have a suspense novel, I had a grocery list.

For longer than I care to admit, I struggled to change Lauren’s personality, nearly reverse it, morph her into more of a wimp like me. For my seven previous novels the main character was me, and that had worked. However, I cannot carry a gun or bring off a swear word convincingly. I’ve seen the faces.

An author’s goal, among other things, is to sound like yourself. Finding my voice the first time took several years; but when I did, it was like receiving a lifetime railway pass. I could climb on the Ginger Barnes Main Line Mystery train and write without concern for the physicality of getting from here to there. Or, put another way, it was like touch-typing. Try changing that. Not easy.

Lauren was now both insecure and strong. She sounded like Carol Brentlinger one minute and Ginger Barnes the next. I stopped, wrote another book, then returned. What was happening to Lauren was also happening to me. We were emerging from difficulties together, feeling vulnerable but able to gather enough confidence to bypass the New York publishers and declare our independence. And yet the verbal merge remained incomplete. My daughter, who happens to teach creative writing, recommended that Lauren and I sit down with a glass of wine.

“Who are you?” I asked over my share of merlot, and finally–finally–Lauren told me.

Donna Huston Murray
at 7:30 AM