The End in Sight

Today I am pleased to present a delightful friend and colleague, Reed Farrel Coleman.  His Moe Prager series is replete with grit and wit served up in beautiful prose.  NPR’s Maureen Corrigan aptly described Reed as a “hard-boiled poet.”  He has published sixteen novels and one novella. He is a three-time recipient of the Shamus Award for Best PI Novel of the Year and a two-time Edgar Award nominee. He has also won the Macavity, Barry, and Anthony Awards. Reed is an adjunct professor of English at Hofstra University and a founding member of Mystery Writers of America University. He lives with his family on Long Island.  Here is what others of our genre have said of Reed's work:

Of ONION STREET
“To say Reed Farrel Coleman’s ONION STREET is a master class in crime fiction does not do him justice. With his Moe Prager series, he has not only chronicled the rich life story of a detective we wish we knew—he’s offered a melancholy history of Brooklyn itself and hundreds of battered communities like it. Few writers working in any genre offer tales with such moral complexity, dark humor and, most of all, heart.”
Megan Abbott, Edgar Award-winning author of DARE ME

Of DIRTY WORK
“A little man with a huge heart and a huge chip on his shoulder, Gulliver Dowd swaggers into the crime fiction world and takes his place with the great investigators. Smart, vulnerable, wounded, heartbreakingly hopeful, I just adore his company. This is a staggering achievement. Bravo!”
Louise Penny, multi-award-winning author of the Chief Inspector Gamache series 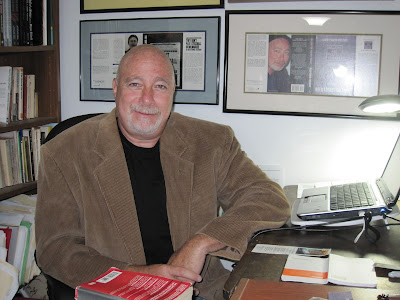 The release of ONION STREET (Tyrus Books, F&W Media) the 8th Moe Prager Mystery, doesn’t mark the end of the series, but it does signal that the end is near. As I write this post, I am a little past the halfway point in THE HOLLOW GIRL (Tyrus Books, F&W Media 2014) the 9th and final installation of the series. What’s so strange is that everyone seems to be convinced that I must be going through some kind of deep emotional turmoil over the series drawing to a conclusion. Mixed feelings? Yes. Deep emotional turmoil? No. And I guess that’s one of the things about authoring a series that is so cool, seeing the investment Moe’s readers have made in him and in his world. What it means—more than the reviews, more than the nominations and awards—is that I have done my job and I have done it well. I can’t possibly express how gratifying that is. 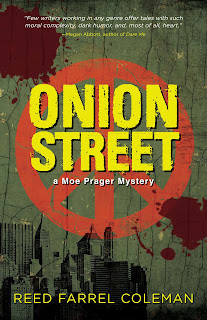 Since word leaked out that the Moe series was coming to an end, there’s one question I’ve been asked repeatedly: Why? The answer is simple, though not as simple as the question. The reason I’ve chosen to end the series has its roots in the very conception of the series. In a fundemental way, I created Moe in reaction to the classic PI conceit of one case walking in the door as the last case walked out. I didn’t want Moe to be a static character. I wanted him to age, to grow, to be a PI and work cases, yes, but also to suffer through the pains in life all of us do. Or to paraphrase Joseph Wambaugh, I wanted to let the readers see not so much how Moe worked on the case as how the case worked on Moe. At every stage of the series, Moe’s life is different. There are sometimes big gaps in years between one book and the next. Think of your own lives, how even a year can make a huge difference in how you might perceive something or react to it.
ONION STREET is a prequel and tells a part of Moe’s story I’ve always wanted to write: how he became a cop in the first place. Throughout the series I have made reference to Moe’s tranformation from a kid protesting the war in Vietnam to a cop arresting protesters. I have hinted at the drunken bet that led Moe away from campus and to the police academy. ONION STREET is that story. And the story takes the reader back to 1967. Moe’s world is turned upside down when his girlfriend is viciously beaten into a coma and left to die in the snow on a Brooklyn street. Suddenly, Moe Prager has a purpose in life. He is determined to track down the man who did this to his girlfriend and to do some beating of his own. But, as Moe finds out for the first time, things are never quite what they seem. 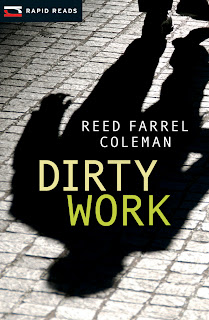 What’s next? Well, although the series is coming to an end with THE HOLLOW GIRL, don’t be surprised if Moe resurfaces in the occassional short story. I have also begun a new series for a Canadian publisher,  Raven Books, an imprint of Orca Books. The series features a little person PI named Gulliver Dowd. Gulliver, whom Louise Penny described as , “A little man with a huge heart and a huge chip on his shoulder,” would reject being called a little person. He hates labels and injustice. DIRTY WORK, the first book in the series, was released in March. I’m also working on the second book I signed on to do with retired NYPD Detecive John Roe for Hyperion. So there’ll be plenty of my work out there and some that might feature Moe.
Visit Reed at: www.reedcoleman.com, on Facebook and on Twitter @ReedFColeman
at 12:30 AM