Bente Gallagher is the author of A Cutthroat Business, first in the Savannah Martin mysteries, from PublishingWorks, as well as the bestselling Do It Yourself home renovation mysteries from Berkley Prime Crime, written as Jennie Bentley. A former Realtor® and home renovator, she lives in Nashville, TN, with a husband and two boys, a hyper-active dog, a killer parakeet, two African dwarf frogs and a couple of goldfish. A native of Norway, she’s spent the past twenty years in the US, and still hasn’t managed to kick her native accent.

A Book by Any Other Name
First off, thanks to Kate for inviting me to submit a guest blog here on the Crime Writers' Chronicle. It’s quite an honor, being asked to help kick off the first few months of a new writers' blog. Almost like I’ve ‘arrived,’ huh? 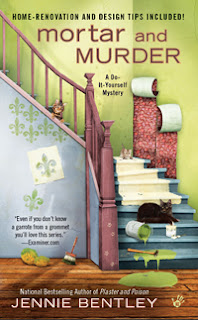 So it’s a new year, and with it, I have a new book. It’s being released today, as a matter of fact. It’s the fourth in the Do-It-Yourself home renovation series from Berkley Prime Crime, about Avery Baker, former  textile designer, and her boyfriend Derek Ellis, a handyman, who renovate houses in a small town called Waterfield on the coast of . This latest installment is called Mortar and Murder, and Derek and Avery have taken on the renovation of a 1783 center chimney Colonial on , about thirty minutes away from Waterfield by boat.
I wanted to call the book Island Getaway. That seemed to me to be the perfect blend of cute and clever, yet it had a somewhat ominous ring to it, and it totally captured the essence of the book.
An island getaway, of course, is a retreat, or vacation, or relaxing time spent on an island away from the hustle and bustle of everyday life. In Derek and Avery’s case, they are spending a few months commuting to the small  to renovate the white elephant they’ve purchased; for a song, since no one else is crazy enough to take it on.
Things go from bad to worse when they come across the body of a young woman floating in the water between  and the mainland. She isn’t dressed for April in , with just a short sleeved T-shirt over her jeans, and neither socks nor shoes on her feet. It’s no surprise to discover that she died of hypothermia, possibly as a result of falling from a boat.
Avery is determined not to get involved in the case. It was a sad accident, nothing more or less; it’s none of her concern at all, or so she tells herself... until a slip of paper is dug out of the victim’s pocket, bearing Cyrillic writing. And not just any writing, but the name and address of Derek and Avery’s realtor, Irina Rozhdestvensky. When the dead girl turns out to be unidentifiable, when nobody knows who she is and no one has reported her missing, the ICE get involved, and soon Irina comes under suspicion for illegal immigration, murder, and human trafficking. Next thing she knows, Avery finds herself knee-deep in intrigue after all.
All of which brings us to the real island getaway: when a dense fog descends on the coast of Maine, halting all ferry traffic, Avery is stuck on Rowanberry Island with a murderer, and with no way off the island and back to the mainland until the fog lifts.
See why I thought Island Getaway was the perfect title?
But no, the powers that be didn't think Island Getaway was renovate-y enough, and we ended up with Mortar and Murder instead. That was my second suggestion, so I can't really complain that they're not using my titles, but I would have preferred to have kept Island Getaway.
The same thing happened with DIY-5, which is coming in October. Derek and Avery are participating in a television show, the basis of which is flipping—quickly renovating—a house in a week before putting it back on the market. The name of the book, as well as the name of the TV show in the book, was Flipping Out! I was very proud of it, as I thought it was the perfect title, especially considering that the villain of the book was acting a little crazy, as well.
But guess what? There’s a real TV show called Flipping Out, and I can’t use the title for the book. And now I’m the one flipping out, because I've lost my perfect title!
Titles are such important things. They can say so much about a story before you even pick the book up. And the best ones make you realize, once you’ve read a little, that what you thought the title meant, isn’t necessarily what it meant. Or not only what it meant, anyway.
Take Faking It, by Jennifer Crusie. It’s about art forgery, but it’s also about... well, you get it. And Welcome to Temptation—Temptation is a town, but the title is also about... I’m sure you get that, too. Terry Pratchett’s Making Money is about—well—making money. As in, printing it. And making it. And making it work. And who could resist a book called Interesting Times?
I think a great title, like so many other things, is more than the sum of its parts. It conjures up more than just the words themselves, and it needs to work on several levels. The more levels it works on, the better it is.
So what are some of your favorite titles? And why?

--Bente Gallagher/Jennie Bentley
at 12:01 AM