How I Became a Crime Writer, or, What I Did on my Summer Vacations 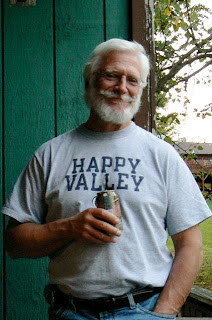 I met Dennis McFadden five years ago when I joined his fiction writers group here in Albany. He was the dean among a talented bunch. He had been getting his stories published in prestigious literary journals. I noted that he had crimes occurring in his stories; their pace reminded me of the atmospheric style of Louise Penny. After I dropped out to write Memoir (a special kind of fiction), Dennis's recessive crime writer's gene tunneled up (stories in 'Hitchcock' and 'Queen' and appearances in Best American Mystery Stories twice).


I must have been meant to be a writer. According to my mother, I was three years old when I looked through the bus window at a busy Washington, D.C., sidewalk and said, “Look at all the pedestrians.” Even then I was a phonetic exhibitionist.

It must have been meant to be, because my upbringing wasn’t much of a factor. Blue collar all the way. There weren’t many books around the house. Nobody in the family had gone to college. Dad told a few bad jokes when he was drunk, but no bedtime stories. I remember getting my hands on some Hardy Boys books (crime novels, now that you mention it), and when I was 15, I picked up a paperback called Boy With a Gun. It was, coincidentally, about a 15-year-old boy. It takes place during the Hungarian uprising, and the kid’s father and brother are killed, he ends up fighting in the revolution, and he and this 15-year-old girl are crazy about each other, but the end left me hanging. The kid was still fighting. The war wasn’t over. He and the girl (with whom I too was in love by then) still weren’t together. What happened? What the hell happened? I had to know. 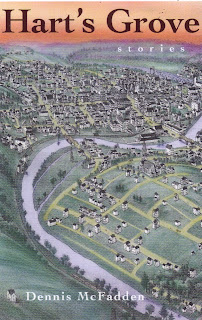 So I wrote to the author, James Dean Sanderson, and asked him, and he actually wrote back! I tore open the envelope, about to have all my questions answered, all the mysteries revealed. But he didn’t tell me a damn thing. He was flattered, he said, that the book had affected me that way. He suggested I write an ending. I should write the damn ending! I should talk to my English teacher—I might even be able to earn credit for it.

Maybe that planted a seed, I don’t know, but I still never entertained writing, not seriously, until my senior year, when my English teacher spotted my “talent,” and singled me out for high and frequent praise. His name was MacBeth. That’s right. MacBeth.

How could I then not go on to college and major in English? I became known as a writer, publishing a couple of stories in the old “lit mag.” I was on my way. Then a funny thing happened. I took 10 or 15 years off after college to drink and party before I finally got around to writing again. My third book was pretty good, good enough to get me an honest-to-God New York City literary agent. But alas. All she succeeded in doing was getting me a higher class of rejections, and she dumped me after a year. In my despair, Irish activism caught me on the rebound, and I spent the next 15 years getting England out of Ireland. All I wrote during that period was propaganda, but I wrote it well and I wrote it plenty. And you know what? It wasn’t bad practice. Some of those satirical pieces were very much like short stories.

As Irish activism fell by the wayside when peace broke out (thanks in large part to me, I like to think), short satire evolved into short stories. Why not back to novels? Maybe because I hadn’t had one published? Maybe because I was getting older now, the green banana syndrome, hesitant to begin any two year projects? Maybe because I loved the high of finishing a story and craved it more often? I became an addict, jonesing for finishes.

One of my first stories was about an old rummy named Doodle O’Hanlon (my stories always start with character, before plot, before anything else), and I put him in Hartsgrove, a little town in western Pennsylvania bearing more than a passing resemblance to my own hometown. Then I wrote about 25 or 30 more Hartsgrove stories, as well as dozens of stories set elsewhere in the universe. I started sending them out, started getting them accepted in literary journals, small ones at first, then bigger. I was hooked. In 2008 I found myself at a writers conference at Colgate, the instructor liked my work, one thing led to another, and out of that happy serendipity, my collection, Hart’s Grove, was born, published by Colgate University Press in 2010.

A few months later, coming back to my desk from a meeting (yes, of course, the old day job), I noticed the red light on my phone. It was a voice message from a gentleman in the employ of Otto Penzler, calling to tell me that my story “Diamond Alley,” from Hart’s Grove, had been selected for inclusion in The Best American Mystery Stories 2011.

I hadn’t submitted the story. A couple of months later I was lucky enough to be able to meet and talk to Michele Slung, the screening reader for the series, at a Sisters In Crime luncheon in Albany (thanks to an invitation from Robert Knightly). She’d noticed an ad in a journal for Hart’s Grove, judged from the copy that it might involve mystery, and ordered it. I’m grateful her radar system is so extensive.

So how does a writer with little knowledge of the genre, who’s never attempted a thriller, a whodunit, or a procedural, end up in Best American Mysteries? No mystery. As I said, I start with character, but given human nature, crime and character go hand-in-hand. And as for mystery, that’s a part and parcel of everyone’s everyday life—mystery in the sense that we can never really know everything that’s happening in and around our lives, or anything that will happen after them. Maybe that’s why I write, why a lot of writers do: the lure of omniscience is hard to resist. It’s a good way to grapple with those everyday mysteries. It’s good to be God sometimes.

This year I had another story selected for The Best American Mystery Stories 2013, “The Ring of Kerry,” which appeared in the “New England Review” in the Fall. This time I did submit. Good radar or no, why leave it to chance? I also have stories slated to appear in “Alfred Hitchcock Mystery Magazine” and “Ellery Queen Mystery Magazine.” (I submitted them too.)

This has led my friend Bob to believe I’m a crime writer.

Guilty (appropriately enough). Proud to be.

Author photo by Heidi Brown
at 8:46 AM