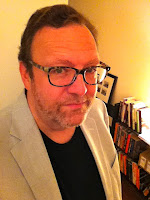 My friend Tim McLoughlin is the editor of Brooklyn Noir and its companion volumes. His novel, Heart of the Old Country, won Italy’s Premio Penne award, and was the basis for the motion picture The Narrows, starring Vincent D’Onofrio.

The cliché of a writer being asked where they get their ideas, and the numerous clever responses conjured out of desperation, is legendary. My situation is a lot more pedestrian and straightforward. Although no one is ever going to accuse me of being prolific, the fiction I do turn out generally centers on crime, or on the kind of people likely to commit crimes on a pretty low rent scale.

I’ve worked in the criminal justice system for thirty years now. If I had been convicted of murdering someone that long ago in New York City I’d have since been released, so I’ve decided to go over the wall this summer and retire. But my career has certainly informed my choice of subject matter. And as I’m more inclined, in my reading and writing, toward the nickel-and-dime world than high-finance-money-laundering-type thrillers, it has suited me well.

I remember exactly where I was standing and what I was doing the first time I heard a 710.30(1)a statement, but then, who doesn’t? I was a brand new, wet behind the ears Court Officer in the arraignment part of Brooklyn Criminal Court in the bad old early eighties. I was the bridgeman, the officer who stands in front of the judge’s bench, calls the case into the record, hands the judge the pertinent paperwork, and gets out of the way. It’s just like Law and Order, except louder and with physically unattractive defendants. It was my first case, and I announced it with confidence, then prepared the next docket while the key players discussed the fate of the accused. After preliminary conversation and a plea of not guilty, the judge turned to the rail thin blonde waif of an Assistant District Attorney.

“Go fuck yourself,” she said, in an absolutely flat, professional tone.

“Anything else?” he inquired.

“Bail is set at one thousand dollars, cash or bond,” he said. “Next case.”

He tossed the court papers into the wire basket of finished work and looked at me expectantly. I glanced between him and the ADA, who was already reviewing a new folder, unsure what to do.

I picked up the next docket, called it in, less confidently this time, and stepped back.

It took me perhaps a half dozen cases before I realized that 710.30(1)a statements were direct quotes from defendants, usually made spontaneously at the time of their arrest. It was therefore not unusual that mixed in with the ubiquitous that’s not my gun and what weed? would be the occasional go fuck yourself or take these cuffs off and I’ll kick your ass. They are basically anything that gets blurted out during the arrest process. Arraignment in New York City Criminal Court is supposed to be conducted within twenty-four hours of arrest. In an effort to keep to that schedule, the processing of cases goes on from nine o’clock in the morning until midnight every day of the year at 120 Schermerhorn Street, just down the block from all of the shiny new condos and hotels now being raised in downtown Brooklyn.

Over the course of the three years that I worked in uniform, I listened to hundreds of 710.30(1)a statements, and came to view them as windows on the unrestrained id.

They can be chilling, as in the case of a man caught in Sunset Park disposing of the bloody remains of his pet pit bull: He farted so I stabbed him.

They can be heartbreaking when a man in East New York is arrested for robbery: I’m sorry. I was hungry. I needed the money. I got the blade on me too.

They can be embarrassing, as in a domestic violence case out of East Flatbush when a defense attorney has just told the judge that the court needs to take into account the social mores of other cultures: She doesn’t have my lunch ready for me when I go to work. I want her to do all the cleaning in the house. Today, I told her to make me breakfast and when I went downstairs she hadn’t made me breakfast. That’s how it started.

And of course, they can be hilarious. After all, if you can’t occasionally find humor in someone else’s misdeeds you have no business being a crime writer. My personal favorite was the young man arrested exiting the basement of an apartment building in Crown Heights where every washing machine and dryer in the laundry room had been vandalized. He was carrying a screwdriver, a hammer, and a pillowcase containing 250 quarters: Those are mine, I’m on my way to a PacMan tournament. The tools are to fix the machines.

This parade of tragedy and comedy occurs fifteen hours a day, seven days a week. And though the poor and anonymous comprise the majority of cases, every demographic makes an appearance. I have witnessed the arraignments of lawyers and doctors, police officers and priests, a former major league baseball player, and a judge. They are not the worst of humanity, but what they share is the airing of their worst behavior. The criminal justice system, by mandating long ago that these proceedings be open to the public, invented reality television without the TV, live and unscripted.

So if you’re looking for ideas, or trying to fine-tune that street lingo to be current to the last forty-eight hours, come down to any of the criminal courthouses. Not Supreme Court, but regular Criminal Court, where the nobodies stay, and even the superstars make that initial appearance. Enter through the smoke-stained revolving doors, their broken glass long ago replaced with Plexiglas. Pass through the magnetometers and be searched for weapons, and then step into an arraignment part and have a seat in one of the rows of church pew benches scored with decades of carved initials and expletives.