Triss Stein, multi-talented mystery author, is a bright star in the firmament of mystery writing. A former native of Watertown, New York, after degrees at Brandeis and Columbia in history, classical studies and library science, she embarked on a fascinating career that would provide material and talent for future exciting novels, including consulting for McKinsey and Company, children's librarian, and staffs of publishers DC Comics and Conde Nast.

Her successful novels, Murder at the Class Reunion and Digging Up Death, paved the way for her current popular novel, published by Poisoned Pen Press, Brooklyn Bones.

We are delighted to welcome this gifted, creative New York writer here today! 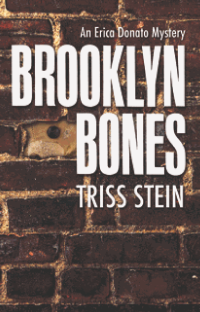 I have a confession to make. I might be the only woman mystery writer in the US who never liked Nancy Drew. My interest in mysteries did not come from my childhood fiction reading at all, but I am beginning to suspect that it might have come from my interest in history and archaeology.

Think about it. The historian or the archeologist digs down through the facts, documents and artifacts to arrive at the truth. Or anyway, “A” truth. Or at least a narrative. Doesn’t that sound familiar? The PBS program, History Detectives, shows us how they do it, and naturally I adore the show. Of course I know that in the show they take a few short cuts, but that’s television. And I have on my desk a 1968 book called The Historian as Detective: Essays as Evidence, edited by Robin Winks, who was all of the following: a distinguished Yale history professor, a mystery fan and an Edgar winner for Best Critical Work.

Real history is full of real unsolved crimes. What did happen to those princes in the Tower? Did Robert Dudley’s wife fall down the stairs or was she pushed, and how much did Queen Elizabeth I know? Poe’s lost last days? Meriwether Lewis’ questionable demise? And who can forget Judge Crater?

In fact, I started Brooklyn Bones not with a sleuth but with a crime—old bones in an old house—and a historian came to mind as the right person to solve it. I made her an urban historian so she would naturally be interested in the context—the time and place—of the crime. I gave her a partly-written dissertation about the dynamics of neighborhood change in Brooklyn because I live in a rapidly gentrifying neighborhood, so does she (not coincidentally, the same one), and the old house with the bones is hers. I gave her a child, because I wanted to write about being a parent. I gave her a teen-age child because—well, conflict is good for plotting!

As she came alive in my mind and started talking to me, I realized I had found my perfect heroine. She’s younger than I am, has a completely different background, she’s a lot more impulsive, a lot less worldly, a lot more street smart. But I know what drives her and I can send her to research life in the past in a way that smashes right into conflicts of life in the present. The mini-mansion mausoleums of historic Green-Wood cemetery? The Jewish gangsters of Brownsville? The Brooklyn Navy Yard when it was operating around the clock to help save the world? The lost and found freed slave community of Weeksville? Erica is never going to run out of old Brooklyn stories to research. And because there are more than bones in those mausoleums, Brownsville still has gangs, and the later fate of the Navy Yard, a large piece of waterside real estate, was much debated, I am never going to run out of modern crimes.

Asking questions. Digging up answers. Understanding what happened then and how it affects now. A historian sleuth makes a lot of sense to me.