The Development of Samuel Craddock

Terry Shames, a Talent to Watch! 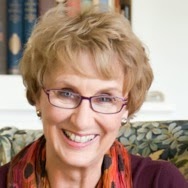 Mystery writers play in a highly competitive league. Some make it to first base, some to second, fewer to third. Terry Shames has scored a home run with her debut novel, A Killing at Cotton Hill, and the second, The Last Death of Jack Harbin.

When Dead Broke in Jarrett Creek comes off the press, I predict Terry will be a Triple Crown Winner!

So, who is this Terry Shames? A Board member of both Mystery Writers of America and Sisters in Crime in Northern California, she absorbed life in a small Texas town as a child. She has been getting high praise from esteemed mystery writers, such as Carolyn Hart and Bill Crider, as well as in Publisher's Weekly.

I agree with Bill's comment: "Samuel Craddock [her protagonist] is a man readers are going to love!"

Sam grips you and grows on you. A man with deceptively simple wisdom, sensitive knowledge of homo sapiens, attractive to women, but faithful to his recently deceased wife, astute, likeable, the kind of guy you and I would want in our corner if we were in trouble.

Shames is one of the few writers who held my attention at every phrase. I did not skip over a single line in A Killing at Cotton Hill!

Please give a warm welcome to Terry Shames! 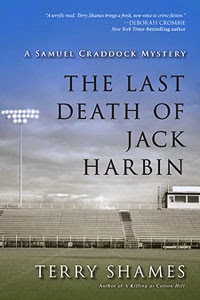 The first time I saw Samuel Craddock he was sitting on his porch in a rocking chair, thinking his life was more or less at an end. His beloved wife had died some months earlier and he saw no future for himself. An ex-chief of police, he had been retired for many years. As I “watched,” a friend of his from down the street walked up the steps and told him that an old friend of his had been murdered last night… a woman who had called when he was already in bed to tell him she thought she was in danger. I followed Samuel where he led me and that first glimpse of him became a full-fledged story of a man in his 60s who regained a purpose in life—to find out who was responsible for killing his friend.

No sooner had I finished A Killing at Cotton Hill, Samuel’s reawakening story, when another story came to my mind. In The Last Death of Jack Harbin, Craddock uses his reawakened skills to track down the killer of a former high school track star whom Samuel had known his whole life.

When time came to write the next book, I realized that this truly was going to be a series and I had some decisions to make. Would Samuel become a professional lawman again or remain an amateur with police skills? Samuel is a man who has a strong sense of justice and responsibility and I couldn’t see having his skills stay in the background. At the same time, he is a “geezer.” How much longer will he be able to call on his physical skills? I could always take the course of not having Samuel age—have him remain pretty much the same man he’s always been. There is a strong tradition of that course in crime fiction and I don’t mind reading it. But I actually prefer reading writers like Louise Penny and Michael Connelley, whose detectives age and have to rely on different skills as their physical prowess wanes.

So I decided in my third book to move Craddock into a position of greater responsibility. I don’t know how long it will last. I don’t know what kinds of crimes and criminals he will face. But I do know he is up to the challenge as a strong and capable person.

With that decision made, I had to face the hard part: If Samuel is to become a “real” lawman, I would have to know how that feels and to know more about the skills he will need. In order to do that I signed up for a course I haven’t thought I needed in the past—the Writer’s Police Academy. I look forward to learning a little bit about being a cop. So far, I’ve been able to wing it—after all, Samuel is a quasi-amateur. The series will never be a police procedural, with all the minutiae about the details of how cops work and their equipment and processes—it will be a series of stories more in line with talented and smart amateurs. But Samuel Craddock is an amateur with a gun.

The other major decision I had to make was whether Samuel was going to find a love interest. I’ve had friends whose mates died who have never had interest in finding someone else; and I’ve had friends who were the opposite. I don’t think Samuel is the kind of person to remain alone, if for no other reason than the fact that there are ladies all too eager to be “that special woman.” You’ll have to continue to read to find out what my decision was about this.

I look forward to Samuel growing and changing. He may become a different person than he was at the beginning of the first book and I have to accept that change. I hope my readers will, too.