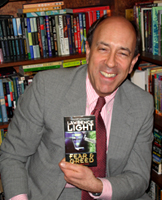 Larry, an award-winning journalist, the author of the acclaimed Karen Glick series of thrillers set on Wall Street, is a man of many talents.

You may have heard him speak at one of the nationwide MWA University programs. Or worked with him on a project, where he has served nobly as Executive Vice President of MWA. Or followed his solid track record at the Wall Street Journal, Forbes, Business Week, Newsday or the Congressional Quarterly.

A graduate of the Columbia School of Journalism, he also served in the Army as a Lt. Colonel.

If you've read his crime novels, you've been grabbed by the throat on Page One. "Tonight Danton was going to kill a member of the Billionaire Boys Club." !!! ( And you stay up all night to finish that story!)

In Larry's novels you know at once you're in for one helluva ride, in posh surroundings, where money flows like free wine!


How did a nice finance guy like you get into murder and crime?

I always enjoyed mysteries. I read the Hardy Boys when I was a kid and Nero Wolfe as a teen. And when I was a young reporter, I covered the cops. I got along well with them, as they were like the guys I knew in the Army. Covering crime was a tour on the dark side, a place of anger and downright evil.

Were you thinking of a future in crime writing when you studied at the Columbia School of Journalism?

Not at all. I wanted to be an ace political reporter, the David Broder of my generation. But that did not come to pass.

As an editor/staff member with the WSJ, Forbes, Business Week, Newsday and the Congressional Quarterly - you have a broad grasp of the financial scene. How does this influence your fiction?

Money lies beneath so much. It motivates much of what we do, defines our status, makes us dream of (possibly unachievable) riches, where you need not worry about how to send the kid to college. But mainly, money is the fuel of power. What I care about is the abuse of power. All my books are about that. Theodore Roosevelt referred to the errant wealthy as "malefactors of great wealth." You don't need to be a socialist to agree with him.

Tell us your method/schedule of writing.

Since I have a demanding day job -- I'm the editor of a new financial website, AdviceIQ -- I write on the nights and weekends. That's tough because I often am wiped by then. But I truly do enjoy it. It's like watching my favorite TV show, but I get to direct.

Do you start a novel with character, plot or setting? Can you tell us more...

I write thrillers, so plot is important to me. My first book, TOO RICH TO LIVE, borrowed the plot from the COUNT OF MONTE CRISTO, in which four friends conspire to send a young man to prison for a crime he didn't commit. Thanks to that scheme, they grow rich and powerful. Their victim (they think he's dead) returns years later as the fabulous and mysterious Count, who himself has loads of money. The Count plots to take away from each villain what he values most and then to kill him. In my modern version, the conspirators are in a buyout firm.

What has been the reaction of your financial colleagues to your crime fiction?

A few business journalists I know, like Bryan Gruley and Matt Richtel, write mysteries. Most journalists think my fiction calling is amusing and not very serious. They have no idea.

What is the best writing environment for you?

Either in the garden behind my home, or in cold weather, at my desk looking out on the garden. It is peaceful and lovely.

How do you handle dry periods of writing – if any?

I don't tend to have them. My problem is finding a good snatch of time to write. I can't do it 20 minutes here, and 20 minutes there.

What modern writers have been an influence on you?

John Le Carre for creating a whole world – mainly the Circus, a.k.a. MI6 – filled with fascinating and flawed characters. When I read a mystery/thriller, I want to be transported to another place, a fascinating place. I adore Ross Macdonald because he dealt with families and their secrets and the world of the rich – and showed how lyrical writing can enhance our beloved genre. I devour the Pendergast series by Doug Preston and Lincoln Child, because they create a bizarre world existing alongside ours with a vaguely supernatural subtext, and a hero who is a magnetic oddball unable to give up.

How do you go about creating a character?

For me, a usually use people I know and of course change them dramatically. Once in a great while, there is payback involved. I once had a horrible boss who hated me and would tell any lie to get rid of me. This person became one of my characters, who was every bit as vile. My heroes and heroines, certainly, are different versions of myself. I insist they they have a sense of humor.

What do you want me to think/feel when I finish one of your novels?

First, entertained. Second, satisfied that powerful, arrogant bastards got theirs. The exception was the noir novel I wrote with my wife, Meredith Anthony, LADYKILLER, where everyone gets screwed and evil triumphs.

You've been very active in MWA. What are some of the duties of an executive VP?

Mystery Writers of America, which I've headed for three years as EVP (I am term-limited out after that), is a wonderful service organization. It stands up for writers. We have gone to bat for writers, sometime alone, when powerful forces (sound familiar?) want to diddle them. MWA upholds standards for the industry -- through our rules for joining the organization, our accepted publishers criteria and the Edgars, which reward the best in our genre. I'm proudest of our new initiative, MWA University, a one-day program we take around the nation that teaches writing. It only costs $50 for the day. As EVP, my job is to harness the great energy in our organization. With the invaluable work of Margery Flax, our dauntless administrative director, MWA is there to help writers every day of the year.

Thank you, Larry, for these wonderful insights and for all your sharing and devotion to the Mystery Writers of America, an organization many of us love!