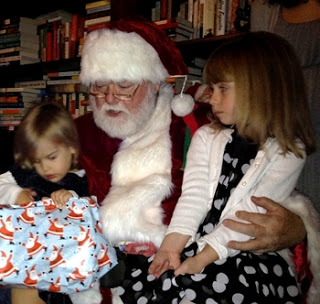 This is my thirty-seventh year of dressing up and going on stage as Santa Claus and I still get performance anxiety. You’d think I’d be beyond such a thing by now? No way: those expectant little faces that turn to me and fix me with their unselfconscious stares give me pause until I bounce through the doorway and shout in my deep Santa baritone: “Children, children, where are the children???”

Of course, I am in my red velvet, white fur-trimmed jacket, pantaloons, and droopy cap with a jingle bell on the end, my own salt-and-pepper beard (more salt now) having been allowed to grow long, carrying a green laundry bag stuffed with small items: a paper fan in a gauze bag for girls, a kaleidoscope for boys, and sex-neutral games that included tens of thousands in fake money (a big hit). The too big cap used to slip down over my eyes ruining many a mom’s picture of her child on my knee, until my wife cured the problem with a safety pin. Mine is no chintzy, off the rack Santa suit; I paid a C-note for it at an exclusive Santa Claus emporium in the West 20s on the edge of Manhattan’s Garment District in 1989, the year I went to work for The Legal Aid Society of NYC. I was expecting to encounter a more demanding audience among the lawyers and their children than the cops I’d just left. Not to worry: same kids. The store where I bought the suit threw in a nice pair of black plastic simulated-boots that covered the tops of my shoes to complete my accessories.

Perhaps, my Great Impersonation is coming to an end. In past years, besides Legal Aid, I’d go on at my wife’s family’s Christmas Party in Springfield, Mass. She’s a Smith, one of twelve, all living and propagating. There’d be several generations at the party, 60 to 70 easily, at least 15 to 20 children of an impressionable age: meaning I could con them into believing I was the real thing. Is that a bad thing? I don’t think so; children need their imaginations fed by the likes of me, not video games. What could be wrong with a gang of small children, after my departure from the home, running from windows facing east to windows facing west, looking for reindeer, one of them yelling: “I see them! I see them!”?

When I enter a room full of children, I don’t walk like an ordinary man. I bound; I scuttle; I walk bowlegged like Quasimodo, all the while calling the children to me, my outstretched fingers making come-hither motions, HO! HO! HO! HO! all the way. After all, I am not just anybody.

That’s how I burst upon the scene of my Neighborhood Association’s Christmas Party last Thursday evening at the University Club in Downtown Albany. I head to the chair in the corner of the room and they make a beeline for me. The best is when a 4-year-old runs, arms outstretched and leaps into my arms. Iula goes on one knee and her sister Lily goes on the other and I gather to me as many as I can. Mothers’ cameras get busy, but at this moment the children are my captive audience, awaiting The Word. I say it : “You are a GOOD boy/girl” This they need to hear off the bat: reassurance to their anxious little selves. Next, Lily, Iula, Razi, Kimberly, Julie, Jennifer, Scott, Tom, John, Zvi (and all the others whose names I can’t remember but whose faces are unforgettable) tell me their names. Then I ask and they answer in close-up whispering what present they want Santa to bring on Christmas Eve. Often, I can’t make out what their little voices are saying but no matter. I advise all that they must tell their mommies what they just told me: that’s the Chain of Command.

Sometimes children don’t want to get off my knee, like 4-year-old Iula who asked me to sing, and without pause, began herself to sing ‘Jingle Bells’. Her sister, Lily, age 6, on my other knee, joined in as I did. Next, a chorus or two of ‘Rudolph the Red-nosed Reindeer’, then the mother took pity and reclaimed the Singing Sisters. I notice one small boy circling us, keeping his distance. I address him directly: “You! Yes, You! C’mere!” His name is Zvi. After I mispronounce it multiple times, he tells me it’s Hebrew and the last time I said it was close enough. He’s six. I give him the pinball game containing the wad of fake money (for betting, I presume) and tell him it’s a Hanukkah present from the Hanukkah Santa Claus. He seems satisfied. As I make my exit, I notice Zvi playing with the others on the hardwood floor, wads of play money scattered about their knees.