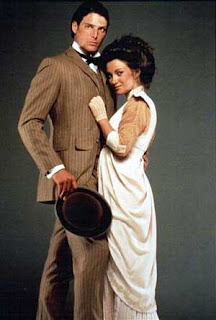 Some years ago as I was working on on a historical novel – I think it was Bucker Dudley – I realized suddenly that I was too deep into the thing. I truly felt that if I didn't get every single detail right not only would it throw the reader out of the story, it would throw me out of the story, like stepping on a crack and breaking your mother's back. That moment in Somewhere in Time comes to mind, when Christopher Reeves pulls the modern dime out of his his historically correct vest pocket and throws himself back into the late twentieth century, leaving behind the woman he loves.

It wasn't even the fear of suffering public shame. (That's when you get fifty or sixty letters from readers pointing out how you messed up, along with several snarky Amazon reviews.) It was this conviction I had that my portrayal of the environment of a story had to be so perfect that anyone who happened to be transported to that time and place could use it for a map.

Sick, right? First of all none of us are ever going back there. There's no such thing as a time machine. Secondly, the environment of a story exists in the service of the story, and not the other way around. All that's required is that the historical details be plausible. What, after all, is Truth? 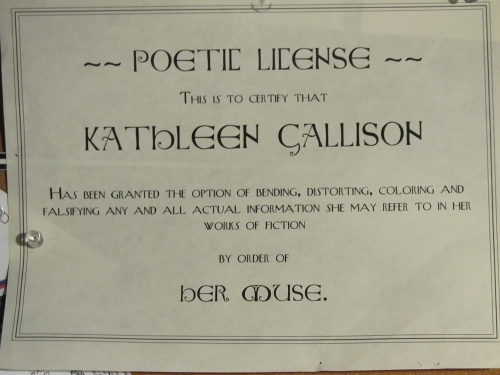 It was Harold who reminded me of the convention of Poetic License. So I whipped up an authentic Poetic License and posted it over my desk.

Now I am able to invent bogus historical details without fear or shame. When at a gathering of historians no less an authority than Professor Paul Israel, the world's foremost Edison scholar, gently pointed out to me that there was no such thing as the portable film strip hole punch I had described in The Edge of Ruin, I was able to smile. Because the hole punch served the story.