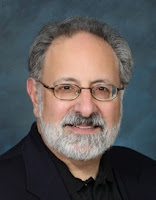 Dennis Palumbo ends his stunning book WRITING FROM THE INSIDE OUT with a quote by screenwriter Frederick Raphael: "Work is... having pages in the evening that weren't there in the morning."

If I were doing a book on "Writing," I'd want to say everything Dennis says. Both a gifted writer and a well-known psychotherapist, Dennis tackles the weighty issues that confront every serious writer: Rejection, solitude, fear, isolation, struggles, envy, tumult, joy and triumph! This book is not a manual for the neophyte. Or a person who toys with the art. Rather, it is like going to your own personal guru, who is experienced both as a fellow writer and as a wise shrink. 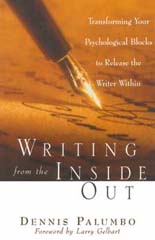 Informed, compassionate and funny, Dennis gives you the confidence that you ARE on the right track, ARE okay and all WILL be well!

That all your agony on this journey IS worth it!

That you have a compassionate friend, a steady guide and a wise companion - that you are NOT alone!

Author of acclaimed crime novels MIRROR IMAGE, FEVER DREAMS and NIGHT TERRORS ( Poisoned Pen Press), a collection of short stories, FROM CRIME TO CRIME ( Tallfellow Press), Dennis has been a Hollywood screen writer for popular series, including "My Favorite Year" and "Welcome Back, Kotter," short fiction in Ellery Queen Mystery Magazine, The Strand, articles in the NYT, the LAT, The Lancet, Psychology Today and the Huffington Post. He has been named UCLA "Outstanding Teacher of the Year"!

Today, as a licensed psychotherapist, he works with established screen writers, directors and novelists, often dealing with issues of anxiety, depression and relationship difficulties.

He has stated "The most challenging aspect of crime/mystery writing is the plotting—making sure there are enough twists and turns!" ( Sound familiar, dear friends?)

He makes us feel "If you seek wisdom, sample every tent in the bazaar!"

We are never too smart, gifted, clever, famous, well-published—to think we are above seeking good advice!(From many years in the challenging world of crime writing—as reader, reviewer, writer—I'm always on the lookout for a superior teacher on how to write better or how to navigate the Slippery Slope of Writing Fiction!)

In Dennis Palumbo I've found a writer who is sage, inspired, experienced, exceptional.

I can't wait to begin his new crime novel, NIGHT TERRORS, that sits beside me as I write this page. 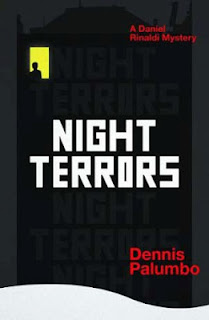 In my latest Daniel Rinaldi mystery, NIGHT TERRORS (Poisoned Pen Press), the Pittsburgh psychologist and trauma expert is asked by the FBI to treat one of their recently-retired profilers. After a twenty year career inside the minds of the most infamous serial killers, Special Agent Lyle Barnes can no longer sleep through the night. He’s tormented by a cascade of horrifying images, along with intense feelings of dread and imminent danger. Until, sweat-soaked, heart pounding, he wakes up screaming...

He’s not alone. Once considered primarily a pediatric diagnosis, more and more adults are currently being treated for night terrors. Why the upsurge in night terrors in adults? Most clinicians—including therapists like myself—are blaming the increased uncertainty of contemporary life. The economy, terrorism. Even natural disasters, like tsunamis, earthquakes, and super-storms. The daily anxiety suppressed by adults during waking life, now invading their sleep.

And since science hasn’t yet discovered what exactly causes night terrors, treating it can be quite difficult. In my novel, Rinaldi’s approach is to get the retired FBI agent to open up about his years as a profiler. His thousands of hours of contact with the most heinous and notorious serial killers. Since Barnes’ work was his life, Rinaldi believes that the best way to address his nocturnal demons is to get him to open up about the real-life demons with whom he spent most of his career.

Not an easy task, since Lyle Barnes is also the target of an unknown assassin who’s already killed three others on a seemingly-random hit-list...

As it happens, I got the idea for the fictional narrative of NIGHT TERRORS from reading about the real-life sleep disorder in a clinical journal. In my dual careers as both a therapist and crime writer, the worlds of psychotherapy and mystery fiction are often equally intertwined.

Take, for example, an institutionalized patient I knew called Angie. All the other patients called her Angie the Android. She was a deeply delusional teenage girl who believed she was actually a machine. Like Pinocchio, her biggest and only dream was to become a real person.

I met Angie the very first week of my internship at a private psychiatric hospital in West L.A. She was one of dozens of schizophrenic patients I worked with at this final stage of my training to be a psychotherapist. It was a thrilling, challenging, enlightening and ultimately humbling period of years. (Even though my former career as a Hollywood screenwriter, working with various film producers and network executives, had already given me valuable experience dealing with psychotics.)

Of course, my internship at the private hospital took place many, many years ago. Now I’m a licensed psychotherapist in private practice, but I’ve woven some of the situations and people I encountered during my clinical training—people like Angie—into my series of crime novels. In fact, it was the opportunity to blend aspects of both my clinical experience and personal biography that prompted me to create the series in the first place.

For starters, my protagonist, Dr. Daniel Rinaldi, is a psychologist. And, although my internship was in Los Angeles, the novel takes place in Pittsburgh, my home town. Moreover, Rinaldi shares a similar background to my own—from his Italian heritage to his love of jazz to his teenage years spent working in the Steel City’s sprawling produce yards. (However, unlike me, he’s a former amateur boxer, and, in general, a lot braver and more resourceful than I am!)

But it’s my clinical experience that most influences my writing, that (hopefully) helps ground my stories and characters in reality. For example, Rinaldi’s best friend, Noah Frye, is a paranoid schizophrenic, his delusions tempered by medication (when he stays on it). Foul-mouthed, funny, and disconcertingly intuitive, this character is based on another real patient with whom I worked.

However, it isn’t just my experience as a therapist that informs some of the material in my crime novels. It’s also the emotions, conflicts and confusions that accompanied my career transition from screenwriter to psychotherapist. To say it was a rocky journey would be an understatement. For one thing, it wasn’t a decision that came easily. Or quickly. After almost 16 years as a Hollywood writer, the idea of changing careers—involving graduate school, years of supervised internships, and the difficulties of setting up a clinical practice—seemed… well… crazy. Frankly, I was so unsure about it that I kept the fact that I’d gone back to school a secret from all but a select group of friends. (It didn’t help that most of them thought I was crazy, too.)

In a similar way, my psychologist hero, Daniel Rinaldi, goes through an emotional upheaval before finding his calling. Though what happens to him is much more painful and life-shattering than merely deciding to change careers. My decision was the result of years of ruminating, of debating the pros and cons. His was in response to a single, overwhelming event—one that leads to his becoming a trauma specialist, treating the victims of violent crime.

No question, what makes the writing of this series so engaging for me is that I’m able to weave together aspects of my clinical training at a psychiatric facility, my current experience in private practice, and the police procedural details of a mystery thriller.

Which is why I knew from the very beginning that the protagonist of my series was going to be a therapist. But not merely because I am one, too.

Let me explain: some years back, I did a Commentary for NPR’s “All Things Considered” in which I lamented the depiction of male therapists in today’s TV shows and film.

In The Three Faces of Eve, Lee J. Cobb helps Joanne Woodward parse out the three distinct personalities tormenting her. Like Claude Rains before him, he’s a model of the patriarchal culture, a therapist of unquestionable motives and unimpeachable authority. One of the good guys.

Which raises the question: how did we get from there to Hannibal Lecter?

Because, I testily pointed out, with rare exceptions that’s where we are. And I still think this is true. Whether in print, in film or on TV, male therapists are serving more and more as convenient villains. Instead of being caretakers, they’re portrayed as troubled, predatory, even psychotic. It seems that every other mystery best-seller or Hollywood horror film features a demented shrink. Not to mention TV shows like Law and Order: SVU and the CSI franchises, where a male psychologist or psychiatrist is as liable to be the bad guy as any garden-variety contract killer or spurned lover.

Now I know enough to be skeptical about pop culture’s notion of any profession, but I can’t help wondering what’s going on. How did the image of male therapist go from father figure to the most likely suspect?

Maybe this change simply reflects one that’s occurred in the culture at large. After all, the past forty years has seen a challenge to the whole idea of male authority. In terms of image, professors, doctors and scientists of the male persuation have suddenly gone from being saints to sinners. Same with therapists. No wonder today’s crime novelists, TV and film writers find them irresistable as villains. All that education, respectibility and power, turned to the Dark Side.

But it isn’t just society’s growing mistrust of male authority that turned Lee J. Cobb’s gray suit and pipe into Anthony Hopkins’ face muzzle and leather restraints. After all, the world’s a pretty treacherous, confusing place nowadays. Our most sturdy institutions—government, the church, education—traditionally headed by men, seem to be letting us down. It’s no different with therapy. Whether fairly or not, I believe the way in which male therapists are portrayed in popular fiction reflects a similar disenchantment with both the profession in general, and its male practitioners in particular.

The truth is, nowadays—much like priests—male therapists suffer from the failed expectations of a disillusioned public. Which is why I wanted my series hero to be a therapist. Flawed, yes. Troubled, stubborn, and with a temper. But someone trying desperately to make a difference. To help others on the path to healing, even if only as a way to come to some kind of peace himself.

I guess what I’m saying is, if Daniel Rinaldi’s mission as a therapist is to treat those crippled by trauma, my mission as a writer is to help resuscitate the image of the mental health professional. Particularly male. Particularly in today’s harsh, cynical world.

Which brings me, by an admittedly circuitous route, back to Angie the Android. Believe it or not, we’re all a bit like Angie. We all want, in both our lives and our work, to be real. Authentic. For most writers I know, myself included, it is—as it was for Angie—our biggest and only dream.

That’s why I’m grateful I got to know her, all those years ago. As I am all the patients with whom I’ve been privileged to work since then. Just as I’m grateful for my lifetime of experiences, both personal and professional. Because everything we’ve ever done informs who we are, how we think, what we write.

The Beat poet Allen Ginsberg once said that our main job in life is to track our consciousness. That’s certainly true for patients in therapy. But I believe it’s also true for those of us who feel the need not only to keep track, but to write it down…

Email ThisBlogThis!Share to TwitterShare to FacebookShare to Pinterest
Labels: Dennis Palumbo, Night Terrors, Psychotherapy, Thelma Straw, Writing advice, Writing from the Inside Out