Better Late Than Never: Dancer In The Flames 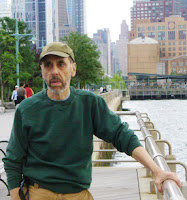 I met Stephen Solomita at an MWA dinner 20-plus years ago. I struck up a conversation, having read his first novel, A Twist of the Knife, with the inimitable NYPD Det. Sgt. Stanley Moodrow. Steve had driven taxicabs on the streets of NYC that he described so lovingly. Then I discovered that we were neighbors in Stuyvesant Town, the middle-class project bordering East 14th Street, First Avenue to the East River, to E. 23rd St. We kept talking and I kept reading his books: 21 novels under the Solomita name and David Cray pseudonym. As he says, “I’ve written a series, stand alones, buddy books and three out of my last four books have had three distinct protagonists per book.” I don’t know any writer the equal of Solomita in creating so many memorable characters to drive his novels. You can’t go wrong by starting with A Twist of the Knife, KeepLock, Bad Lawyer or his newest, Dancer In the Flames, whose genesis he describes next. 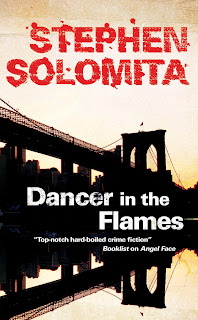 For the most part, I write by the seat of my pants. An idea emerges from the inner depths, usually limited to a premise and couple of major characters, and off I go. Mostly, it works out. When it doesn’t, I discard the material, no matter how far along I’ve come. In fact, in order to avoid the near occasions of sin, I delete the files and recycle the hard copy.

Dancer in the Flames (to be published later this year in the U.K. and early next year in the U.S.) found its way into print by a more circuitous route. The work began more than ten years ago as a short story. A New York City detective, Boots Littlewood, interrogates a bookie in the death of the bookie’s sister as they watch the end of a Yankee-Red Sox baseball game in the bookie’s living room. The detective is a fanatical Yankees fan who bets on the games. The bookie, Frankie Drago, who takes his bets, has been a friend since high school.

I never made any great attempt to publish the story and it sat in a drawer for many months while I worked on another project. But it never entirely vanished. Boot’s quirkiness continued to appeal, even months later. Though utterly absorbed in the close, back-and-forth game – The Boston Red Sox and the New York Yankees are ancient enemies – Boots remains a professional. The game’s tension becomes a weapon he uses to ratchet up the pressure on the hopelessly outmatched Frankie Drago.

Eventually, I returned to the short story and added several chapters. Enough to form the beginnings of a novel, enough to be certain that something was missing. I might have chucked the whole project at that point, but I remained intrigued by my detective. Boots is a model of inconsistency. A detective third grade who labors in an obscure precinct, he believes only that, on this little patch of ground, he might be able to improve the lives of his friends and neighbors. At the same time, he protects the bookie who takes his bets. Yet even here, he’s inconsistent. Boots is willing to overlook Frankie’s bookmaking activities, because it’s in his interests to do so, but he won’t overlook a homicide. The dead must be avenged.

For a second time, Boots and his adventures went into a drawer and I continued on to other projects. Then, perhaps a year later, I happened to watch an American skier named Pikabo Street race in the 2002 Olympics. Specifically, I watched her fly down a nearly vertical slope on a pair of sticks at 70 miles, or 122.6 kilometers, per hour. A gold medal winner in the 1998 Olympics, Ms. Street finished 16th in the 2002 downhill. That’s because she’d torn a ligament and snapped her left femur in two when she came off those sticks in a prior competition.

Not being the brightest star in anyone’s firmament, it only then occurred to me that women participate in all of those danger-junkie activities we generally associate with men, from extreme snowboarding to assaults on Annapurna. But what moved them? I didn’t think they were very much like the women I knew, any more than I was like the men who engage in similar pursuits. Not only couldn’t I imagine myself emulating Pikabo Street, I couldn’t imagine myself standing at the top of the slope without becoming dizzy. For me, making an illegal left turn at five o’clock on a Sunday morning is as risky as it gets.

Male or female, these adrenaline junkies weren’t primarily inspired by money. Of this I was sure. Too many amateurs and too many pursuits, like rock climbing, without a monetary payoff. No, what these risky pursuits had in common was risk. Not the simulated risk associated with roller coasters, but a real possibility that you won’t come through in one piece, or at all. How many times can you challenge fate before you end up in a wheel chair with a ventilator tube protruding from a hole in your throat? Or in a closed coffin?

Being a mystery author, it didn’t take long before I put my risk-taking woman in a police uniform. I wrote six short stories about a cop named Jill Kelly. Dubbed Crazy Jill by her admiring colleagues, she works the streets of a small, fictional city. Two of these stories were published, the first in a defunct online magazine and the second in the anthology Queens Noir, which is still in print. A third story, Crazy Jill Fights Her Duel, recounts the incident that led her peers to pronounce her crazy. It’s available on my website, www.stephensolomita.com.

Jill Kelly possesses a finely-honed skill, like most thrill seekers. A veteran of shooting competitions, including fast draw contests, she only missed qualifying for the Olympics by a hair. She takes this skill to the mean streets in search of the very confrontations most cops dread. When the shooting begins, unlike her panicked colleagues, Jill remains calm, focused and deadly. While others dive for cover, she runs toward the threat, only waiting for the shooter to show himself.

I don’t know why it took me so long to put Crazy Jill and Boots Littlewood together, but when I finally did, Dancer in the Flames wrote itself. Conservative Boots, who still lives in his childhood home, a two-family house owned by his father, and who regularly attends services at a local parish church. Crazy Jill Kelly, who’s tied only to the moment, and who tells Boots, “As far as I’m concerned, the examined life’s not worth living.” These two are thrown together by the powers that be, including Jill’s uncle, the NYPD’s Chief of Detectives. Whether either will survive is an open question.


Stephen Solomita has been writing novels for so long now that he has difficulty remembering a life before he began pounding a keyboard. He has vague memories of growing up in Bayside, a community located at the outermost reaches of New York City in the borough of Queens. His published works are legion.
at 8:55 AM

Email ThisBlogThis!Share to TwitterShare to FacebookShare to Pinterest
Labels: A Twist of the Knife, Dancer in the Flames, David Cray, Robert Knightly, Stephen Solomita