The Tale of Two Jacks: The Gangster and the President

Denis Foley, a forensic anthropologist and historical archeologist, is author of the true crime thriller Lemuel Smith and the Compulsion to Kill (NK Burns Pub., 2006). He has a passion for researching the Irish in America whether they be gangsters, martyrs or rebels; most recently “On Tour and Exiled; James Connolly in America 1902-1905” in the 2013 issue of Saothar, the Journal of the Irish Labor History Society. He is working on his debut novel, Murder Most Irish, set in the Bronx and the Inwood Section of Manhattan.


The Gangster Killed by a Politician 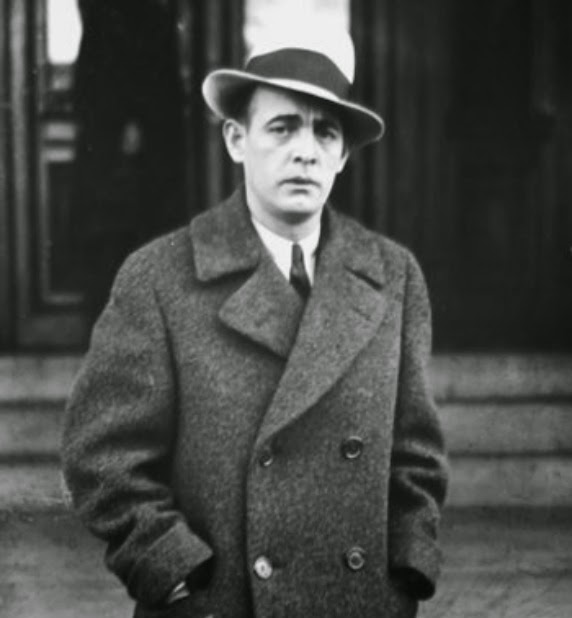 Former City of Watervliet Police Chief Francis Landrigan claimed that in order to understand who killed Jack Legs Diamond, aged 34, in a Dove Street rooming house in Albany on December 18, 1931, you had to go to the City of Watervliet next door and look into the affairs of the Hess brothers, Seymour known as ‘Big Mouth’ and Eugene. The brothers were Legs Diamond’s lieutenants in Watervliet, a small industrial city just north of Albany on the Hudson River. It was known as the Barbary Coast in the late Nineteenth Century because of its many bars and lawlessness. Eugene Hess was a clerk in the Troy Law Offices of Dan Pryor, Legs Diamond’s attorney. Seymour Hess, a member of the upstate Poka-Dot gang, guarded Ziegfeld Follies showgirl Kiki Roberts on Legs’s orders during his trial in Troy for kidnapping. Seymour was charged with keeping Kiki, the girlfriend, and Mrs. Alice Diamond, the wife, apart. Legs’s bodyguard, Watervliet Police Sgt. Frederick M. Broderick, and Legs were inseparable during the trial. Yet, Broderick was mysteriously absent the night Diamond died.

Legs routinely frequented Watervliet and the Village of Menands to gamble and drink in the Hess speakeasies. In Menands, he visited a ‘safe house’ and his vehicle fleet garaged at Tillinghast and Broadway. He owned garages in Watervliet as well and would bring booze in from Chestertown to Watervliet in funeral hearses. The Watervliet bootleggers as well as those from the City of Troy across the Hudson from Albany threw in with Diamond for access to his liquor distribution network. Diamond also operated a distillery in the Town of Halfmoon in adjacent Saratoga County. Dan O’Connell, the Democratic Machine Boss in Albany, also supplied the area with beer and liquor. He owned Hedrick’s Brewery. Dan and his brother Solly ran numbers, the baseball pool and prostitution in Albany and its environs. City-slicker Legs Diamond was not welcome in Dan’s City.

Dan O’Connell concentrated on the local baseball pool and bootlegging and politics. He sent his Albany Night Squad detectives, Sgt. William Fitzpatrick and Det. John McElveney, to warn Legs to stay out of Albany. O’Connell owned the Albany Police. Their squad cars accompanied caravans of liquor, transported from Joseph Kennedy Sr.’s warehouses in Montreal, across the St. Lawrence River and through the St. Regis Mohawk Reservation (still today the preferred route for contraband), to O’Connell’s warehouses in Albany. Dan and Joseph Kennedy, the millionaire father of JFK, were business partners. Kennedy had set up shop downtown in the Standard Building at 112 State Street, occupying the penthouse.

Legs Diamond, the young interloper from the streets of Manhattan, owner of the fashionable HotsyTotsy Club in Harlem, exiled himself from NYC to Acra, 130 miles away in the Catskills, after shooting to death two Club patrons. He’d stayed one step ahead of the NYPD. A hijacker of fellow bootleggers, Legs survived assassination attempts by the likes of Dutch Schultz and Vannie Higgins. The Higgins gang shot him five times; as a result, Legs, once known as ‘Gentleman Jack’, became ‘The Clay Pigeon.’ He retreated Upstate to recoup, and by all accounts was prospering.

Legs Diamond was one of the most successful of Prohibition Era gangsters, a shrewd businessman who accumulated millions. He was successor to Arnold Rothstein, whose bodyguard he’d been. Legs followed Rothstein’s example, branching out from booze to the more lucrative heroin and cocaine trade, traveling to London and Brussels on that business. Rothstein, labeled the ‘Gangster of Gangsters’, at his death was the richest of the Organized Crime tycoons and the leading illicit drug importer. Diamond reputedly killed Rothstein for putting the Feds onto his drug business. Darling of the national press and symbol of the Prohibition Era, Diamond mistakenly believed he didn’t have to play the Albany game of sharing the spoils with the Political Machine.

Pulitzer Prize-novelist and Albany newspaperman, William Kennedy, in a 2011 lecture at Freedom Hall in Troy, told a spellbound audience that as a reporter for the Albany Times Union he’d interviewed Dan O’Connell who admitted that he’d ordered his Night Squad detectives to eliminate Diamond. The details of the plot are pure Albany.

Legs had made a fatal error when he picked the rooming house at 67 Dove St., Albany, for his lodgings. 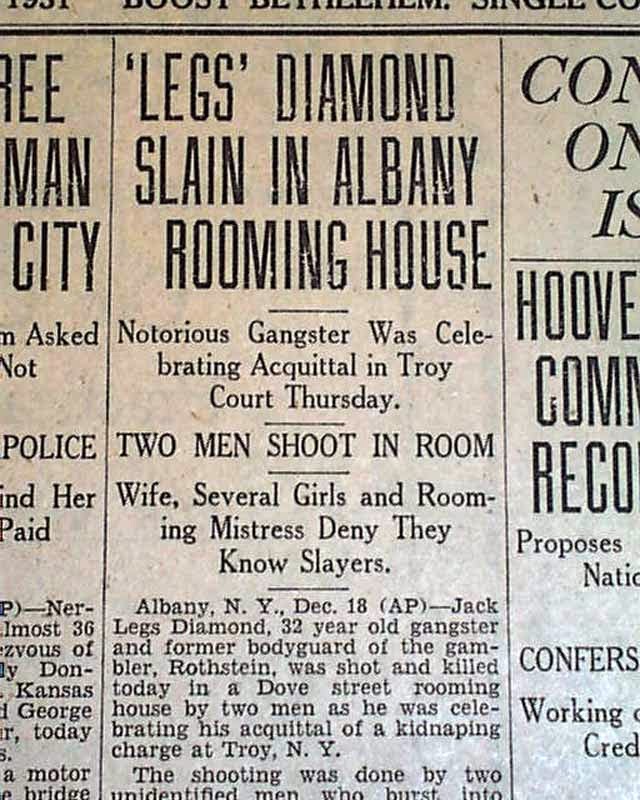 Sixty-seven is adjacent to 65 Dove, owned then by Charles Loftus, Democratic Committeeman for the Sixteenth Ward. Loftus informed Ward Leader Harry Wands of Legs’ presence as well as the times that he came and went. Legs was known to frequent the Kenmore Hotel, a jazz scene hotspot in Downtown Albany, speakeasies like the Parody Club on Hudson Avenue, and Kiki’s apartment on upscale Ten Broeck Street. Arriving home drunk in the early hours of December 18, 1931, he was passed out on the bed when Dets. Fitzpatrick and McElveney entered his room and fired three bullets into his head. A passing newsboy claimed he saw the killers in their fedoras speed away in a red Packard. A female witness reported seeing the detectives as they left the Dove St. address. The Albany Times Union’s presses on Sheridan Avenue were typesetting the story of Diamond’s murder before it had occurred; Police Reporters Joe O’Heaney and Ray O’Connor had been tipped by the Night Squad. As Robert Coleman, former Albany Assistant Police Chief, noted, in pithy understatement, “The Night Squad visited Legs that night.”

Back at Police Headquarters on Eagle Street, Det. Sgt. Fitzpatrick announced that he alone had shot Diamond. Det. McElveney let his superior take the credit. Edward O’Connell, Chairman of the Albany Democratic Party, thought that his younger brother Dan should have just roughed up Legs and escorted him out of town over the Dunn Memorial Bridge to the City of Rensselaer. Edward O’Connell, senior partner in the law firm of O’Connell and Aronowitz, hated bad publicity like the firestorm that erupted around Legs’ murder. But he needn’t have been overly concerned. Albany’s worst-kept secret was never revealed in the press. The Albany County District Attorney John T. Delaney did travel to Boston to interview Kiki Roberts, who’d fled to her mother’s house in New England, but no indictments were forthcoming. The police were reported by Hearst’s Times Union to be of the opinion that New York City gangsters Dutch Schultz or Fats McCarthy or the local Oley brothers killed Legs. A stolen car recovered on the Bethlehem and Albany Line on Route 9 was described as the killers’, abandoned and pointed south towards New York City.

Lawyer Edward O’Connell bridged the two sub-cultures in Albany. His brothers, Solly and Dan, ran the streets and the rackets. The patrician Anglican and Dutch Reformed elite—powerbrokers since the Civil War Reconstruction Period—were entrenched in the professions and business, as represented by Lt. Governor Edwin Corning. His son, Erastus Corning the 2nd, was to become Albany’s longest sitting Mayor, a 42-year-tenure, and Dan O’Connell’s successor as head of the Democratic Machine.

The Hon. Eugene Devine, a former Justice of the New York Supreme Court’s Appellate Division, demurred, nostalgically characterizing the Organization as more like a family, a clan, than a machine. Clergy, cops, wardmen, newspapers, big business and mom-and-pops had ties to the ‘family’ and Dan, the paterfamilias, saw to all receiving a piece of the pie. Judges, the Police Chief, the Mayor, all made pilgrimages to Democratic Party Headquarters at 75 State Street, or Dan’s home on Whitehall Road. Two former associates, an Albany Alderman and a Ward leader, remembered that O’Connell kept $250,000 in his safe at home while another insider recalled that Congressman Lee O’Brien carried $10,000 with him in a satchel at the Elks Club, “in case Dan called and money had to be immediately distributed.” Loyalty to the ‘family’ had its rewards, and, conversely, what was seen as disloyal, punished. An oft-repeated story has it that when Dan was told of a Democrat job-holder being seen at a Republican candidate’s fund-raiser, a phone call lost the man his employment with the State.