The Mystery of Titles

Sandra Parshall's blog "How I Write" should be required reading for crime writers! (Find it on her website at www.sandraparshall.com.)

A pillar of Sisters in Crime, Sandy, a native of South Carolina, is a constant source of helpful information on the publishing world for many mystery/crime writers. As a child she wrote stories on pulp paper tablets, then as an adult progressed from writing obituaries in Spartanburg to top-notch features at the Baltimore Evening Sun.

Winner of the esteemed Agatha at Malice Domestic in 2006 for The Heat of the Moon, she combines her love of animals and her keen observations of human nature in her series, featuring veterinarian Rachel Goddard.

Her current novel, Poisoned Ground, explores the issues of land development in the Blue Ridge Mountains, as well as poisoned ground beneath a bucolic Southern surface.

An avid photographer, she would love to visit the Wolong and Chengdu panda centers in China!

I am delighted to have her as our guest today…


Everybody agrees that a great title is essential to a book’s success. Unfortunately, agreement on what makes a great title is hard to come by. Sometimes the person closest to the material, the author, is the worst judge of what to name it. 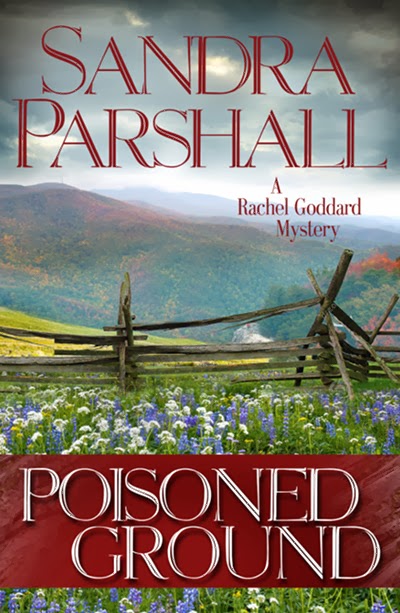 Other examples of poor title choices by authors are less offensive to our social sensibilities but equally cringe-worthy.

We’ve all heard about the various names attached to F. Scott Fitzgerald’s most famous novel before it became The Great Gatsby. Would you want to go see the film version of Trimalchio in West Egg or Among the Ash-Heaps starring Leonardo diCaprio? Would you be even slightly tempted to pick up a book with one of those titles?

The original title of Harper Lee’s To Kill a Mockingbird was Atticus. Beloved though the character is, his name alone just doesn’t do it as a title.

Carson McCullers titled her first novel The Mute. Houghton-Mifflin changed it to The Heart Is a Lonely Hunter, drawn from an 1896 poem by Scottish writer Fiona McLeod.

Crime fiction titles have to carry more baggage than those on literary novels, and the name Christie’s book ended up with is a good example of that. And Then There Were None has an ominous ring to it. We know something terrible is happening between the covers of this book, and the mystery fan in us wants to find out more.

The crime fiction umbrella covers several subgenres, and titles are chosen to signal what type of mystery or suspense novel the reader can expect. Even without seeing the colorful, pleasant scene on the cover, we can recognize a cooking cozy or a knitting cozy by its title. A humorous mystery needs a title to match. A blunt, one-word title like many of Karin Slaughter’s — Blindsighted, Fractured, Undone, Fallen, Criminal — tells us to expect a hard-edged thriller.

The titles I love, though, have a bit of poetry in them, and they’re often found on books with a strong psychological suspense element. A Dark-Adapted Eye, by Ruth Rendell writing as Barbara Vine, is the most beautiful crime fiction title I’ve ever seen, and it perfectly evokes the mood of this novel about family secrets.

Some writers agonize over choosing titles, seeking advice from family, friends, and their writing communities. Others have a title before they’ve fully developed the concept for the book, and they cling to it after it no longer fits what they’re writing. Few authors are happy when their publishers rename their work, and they may rail about marketing taking precedence over creative judgment — even when everyone else can see the publisher’s choice is clearly better.

Most of my titles have come from the text of the books. At some point, as I’m writing, a phrase will spool out on my computer screen and I’ll stop and say aloud, “That’s it.”

My working title for The Heat of the Moon was Memory. Then I wrote a passage in Chapter Eleven about an incident in Rachel Goddard’s childhood that made her realize her mother would never truly love her. “Her show of affection for me,” Rachel recalls, “was like the heat of the moon, an illusion, a glow that gave no warmth.” As soon as I wrote the line, I knew I had my title. I still love it, but I’ve grown used to people misremembering it, calling it In the Heat of the Moon or (confusing it with the movie) The Heat of the Night.

Disturbing the Dead also came from a line of dialog, when someone warns Tom Bridger — who has just discovered two skeletons of long-missing women on a mountain — that no good can come from disturbing the dead. The damaged lives of so many characters in my third book suggested the title Broken Places, and Bleeding Through seemed ideal for a book about secrets from the past bleeding through into the present and destroying lives. Among my six books, the one title I don’t like is Under the Dog Star. It fits the story, but I’ve never lost the feeling that I could have come up with something better.

Poisoned Ground, the title of my new novel, is a metaphor for the lethal strife among local people over a proposed resort development in the small mountain community of Mason County, Virginia. But it has another, hidden, meaning that gradually comes into focus as a present-day murder investigation uncovers long-ago events on some of the properties in question. That’s the kind of title I love, one with layers of meaning.

What sort of titles attract you to a book? What are some of your favorite mystery titles?

Sandra Parshall
www.sandraparshall.com
at 7:30 AM