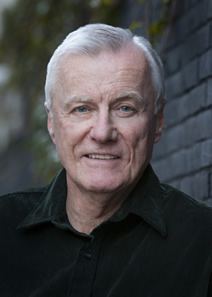 I met Jack Partridge in a roundabout way. We were vacationing at the stunningly beautiful Velas Vallarta Resort in Puerto Vallarta, Mexico, in March, 2008, languishing at poolside (with one eye cocked, however, for the return of the enormous, regal Peacock who had just made off with Rose’s hamburger, leaving the bun behind). I noticed a couple next door with their daughter who was reading a book whose cover seemed familiar but I couldn’t be sure, so I walked over and introduced myself as self-deprecatingly as I could: “Hey, that’s my book you’re reading!”

Indeed, Sarah Partridge had a copy of QUEENS NOIR, hot off the presses that January. We were inseparable after that. I came to learn that Jack was a partner in a good-sized corporate law firm in Providence, Rhode Island, where they lived. All I knew about Providence then was that its Mayor had been convicted of Bribe Receiving after trial and went to State Prison but upon his release was reelected to another term as Mayor:, and that the Presiding Justice of Rhode Island’s highest court had recently been indicted (for “High Crimes and Misdemeanors,” I presumed). I soon learned that Jack Partridge wrote crime novels set in Providence (where else?) and the game of pool figured large in both mysteries, CAROM SHOT and STRAIGHT POOL, so, curious, I asked: Why pool? 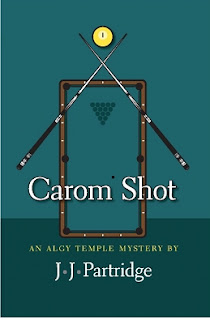 Why Pool?  It's my metaphor for a murder investigation. Consider the basics of the game. The cue stick confronts and strikes the  cue ball and the cue  ball strikes the object ball  which in turn either heads for the desired pocket or strikes another ball or side rail,  which may end with a ball falling into a pocket. With every shot, a result, some not intended. English on the cue ball, finesse or power on the shot, the rules of the particular game, the spin and the speed, all are in play. Clues and cues are merrily intertwined. A glancing shot here, a misplay there, an errant shot, a cue ball not in the right spot for the next shot: all played out spatially to the grim facts of a murder, the search for motive and the killer.

When the first Algy Temple  mystery was conceived, I knew that Algy  would be a  Waspish  character, the scion of Yankee nobility, rich but independent, proud of and burdened by that ancestry, not able to remove himself from  his  traditions,  thoughtfully discerning as to today's morals, judgments, and political  and academic worlds. At an early age, Algy  becomes a pool – not billiards – player with buddies he has picked up in school,  begins to understand class distinctions, associates with kids  from varied economic and social and ethnic backgrounds, and finds his own path. Two friends, Tony Tramonti ( to become Providence's Police Commissioner and later Mayor of Providence) and Young Jimmy Hannigan (a pool wizard, hustler , and club owner) are important characters in the series. 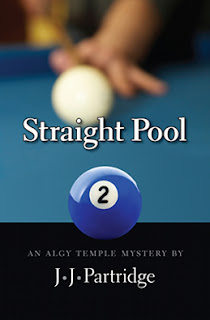 Algy, a trial lawyer, has changed his career to become the in-house  lawyer at Carter University, an Ivy League  institution located on the East Side of Providence, a challenging  place  that allows Algy  to display sharp elbows in continuing  town and gown conflicts, while dealing with the often myopic politics of academia, its  social values  and attitudes. In CAROM SHOT, he describes the atmosphere thusly:

" ... an Ivy League campus is ... populated with concentrations of the politically correct and cultural war militants...with sensitive, micro thin skins and memories like elephants" and the job as being "... the Attorney General in a mini-state inhabited exclusively by the smart, the opinionated. and the stubborn, surrounded by antagonists who would like nothing better than rubbing (the University's administrators) faces in the merde."

Much of this  brought into focus by his fiancee and lover, Nadie Winokur, a popular prof at Carter University, who is chic, willful, kind and a feminist to her bones.

Pool, and the characters  that live in that démodé of skill, chance, and gambling, provide  opportunity for brushes with death as does  the academic life.

And Providence? Is there a murkier place in America?  Chicago takes lessons on chicanery from Providence. My Sonny Russo character as the mayor of Providence  captures the too often corrupt, nudge-nudge life of our city government. You have to love a place where mayors sometimes serve 5 years away as a guest of the government – Rhode Island governors just plead guilty – and how do you get anything done in a city where scandal is a way of life. Well, you try.

In CAROM SHOT, it is a serial rapist on campus who incites racial tension (it is always there) and the death of a student  and a conservative and controversial prof  that are the vehicles for investigation; in STRAIGHT POOL, it is the death of a Native American in a fire at a new and exclusive country club; in SCRATCHED, the body of a prominent professor is found in the Providence River during one our famous WaterFire events.

The third in the Algy series, SCRATCHED, hopefully will be out in 2013.

Love to hear from mystery readers. Please check out my blog at www.jjpartridge.com.