WHO Done It? And WHY? 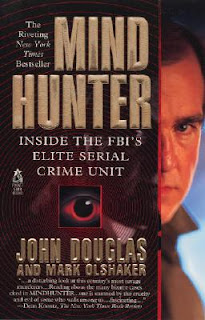 Writers who track John Douglas, the FBI's legendary "mindhunter," recognize those words from his own writing.

This former chief of the FBI's Investigative Support Unit is revered by many crime writers as THE pioneer of modern behavioral profiling of violent criminals.

In a crime novel the negative force must be strong enough to wage a good fight with the good guy.

The legendary editor Ruth Cavin told us often that you can fix plots, but your characters have to hold their own.

After the first time I heard John Douglas speak at MWA-NY, I became fixated by his ideas. I read all his books – Mindhunter, Unabomber, Journey Into Darkness, Obsession, The Anatomy of Motive, Sexual Homicide, The Cases That Haunt Us, including his own fiction, Broken Wings and Man Down.

He explained that the law enforcement community moved from sole reliance on the "Bible" – the DSM, the Diagnostic and Statistical Manual of Mental Disorders – into the CCM, the Crime Classification Manual that Douglas, with his colleagues Ann W. Burgess, Allen G. Burgess and Robert K. Ressler, developed. A catalog of crime behavior that showed investigators not only that X type behavior was a form of mental illness, but how dangerous it might be!

Douglas and his associates developed a method of profiling criminals that has been the foundation of many criminology professionals, not only at the FBI Behavioral Science Investigative Support Units, but to police departments and prosecutors worldwide.

John Edward Douglas was born in Brooklyn and served in the U.S. Air Force. Well-educated, with a doctorate, he served at FBI as a SWAT Team sniper, a hostage negotiator and taught hostage negotiation and applied crimnal psychology at Quantico.

As a consultant worldwide, he was the model for Jack Crawford in Thomas Harris' novels Red Dragon and Silence of the Lambs, as well as consultant for the films.

Countless crime writers have learned from John Douglas about the inner working of personalities whose main goals in life are to kill and to hurt.

To manipulate, dominate and control.

Few of us have walked into danger freely as Douglas has, "through an open yard where violent prisoners roamed freely, a scene that reminded me of Dante's Inferno. Where the most violent criminals might try to kill us for the prestige for having murdered an FBI agent."

Douglas believes that most violent offenders came from dysfunctional backgrounds. That most psychopaths "seemed so charming, so ordinary." That behavior reflects personality. That many violent criminals are "ego driven." That behavior is consistent. Even in its inconsistency, it's consistent.

That "with the exception of a very few truly insane (and generally delusional) individuals, these people choose to do what they do."

Douglas is a valid guide for any writer who wants to dig deeper into the motives of his/her villains.

In his own words, he gives one path a writer might want to try: "As I had so many times before, I put myself into the mind of the killer." (Journey Into Darkness, p. 15.)

We crime writers can also remember the words of Raymond Chandler for our heroes… "Down these mean streets a man must go who is not himself mean, who is neither tarnished nor afraid." (The Simple Act of Murder)