…Author of WHIMSEY, Friend to the Stars of Mysterydom 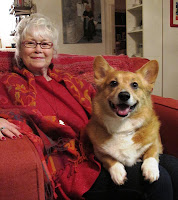 Kaye is known to most crime writers today, since her blog Meanderings and Muses has hosted just about every talented mystery writer in the universe. And as first Sunday blogger at Jungle Reds, she has an even larger audience now.

Charm, wit, humor and warmth—these are some of the words that describe this Southern writer from North Carolina, a state dear to my heart! With joy and gratitude I welcome Kaye as our guest today!

Kaye, you are one of the most gracious and friendly writers I've ever encountered! To what do you attribute this wonderful quality?

Thelma, you are the kindest woman—Thank You! I'm not always so gracious, I'm afraid. My outspokeness tends to get me in some hot water from time to time. But I do try to remember to treat people the way I'd like to be treated. I have to say, though, that when I'm treated badly I'm not going to just stand by and take it without speaking up.

Since many of your guests at your Meanderings blog are crime/mystery/thriller writers, can we look forward to your own crime novel in some future day? 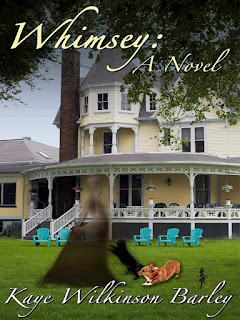 Haven't I been lucky with the guests I've had at Meanderings and Muses?! Many of those guests, I'm proud to say, are friends and I feel quite lucky and blessed to have them in my life. As far as writing crime fiction, I don't know. WHIMSEY was almost a crime fiction novel, but the characters had a different idea about things and I listened when they spoke. The next book, which I'm working on now, is going to be Whimsey Book #2, so not crime fiction. But, maybe, on down the road, who knows? Maybe.

Your husband is such a marvelous photographer. Does he also have literary plans?

Don has such a great eye for photography, doesn't he?! He's an inspiration to me in many ways - his photography is one of many. He surprises me in many ways - constantly. I was surprised when he agreed to write a piece for Meanderings and Muses after his heart attack. What he wrote was heartbreaking and beautiful and brilliant and it touched a lot of people. You can read it here: www.meanderingsandmuses.com/2010/05/phone-call-no-one-ever-wants-to-get.html. He has a curiosity about life that's pretty amazing, so he tends to learn and to try a lot of different things. Writing? Who knows—I wouldn't be surprised, really.

Through you, I've become a dedicated fan of such stunningly talented writers as Earl Staggs and Bo Parker. For this, I have to say a huge Thank You! How did you get to know them?

Those guys are great, aren't they?! Wow. And both possess an amazing amount of talent. I met them both through DorothyL a lot of years ago. I'm happy that they're both friendships that have continued over the years and have grown. And I'm happy to have been able to introduce you to them.

You are becoming one of the most popular women writers of the American South. What do you advise women just starting out, who want to write fiction and get published?

I think you must have been expecting Margaret Maron here, right? Or Sarah Addison Allen?

The only advice I have to offer is this—Just Do It. Whatever "it" is. Writing, painting, photography, sculpture—whatever. Just do it. Don't wait until the time is right, or you have more time, or till the kids are grown. Suppose ten years goes by and you're still waiting for the right time? If there's something creative inside, you need to find the time to let it bloom. You'll be a better and happier person because that's your joy—and it will give back every single minute that you give it. I know that sounds like some motivation dreck to some people and I don't care. It's the truth.

As far as publishing, I made the decision to self-publish. And I did it for a number of reasons and it's working for me, but it's not for everyone. If you're interested in why I chose that route, you can read all about it right here: www.meanderingsandmuses.com/2013/01/why-ive-decided-to-self-publish.html.

Many writers in our current climate are discouraged by the difficulty in selling to a major publisher. You have recently taken the route of self-publishing with your charming novel called WHIMSEY. Can you tell us the steps you followed, how you felt about it, and any advice you wish to share with us about the growing world of self-publishing?

Thelma, honestly, the whole two years I was working on WHIMSEY, I had intended to try to publish traditionally. I did my research, I made lists of agents and editors of some of my favorite authors (the acknowledgements in books by your favorite writers is an excellent source for this type of information). But when I was finally finished and when Earl Staggs, who edited WHIMSEY, agreed that it was finally finished, the traditional route suddenly wasn't as important to me as it had been in the beginning.

What was important to me now was getting it out there. I personally think, for one thing, that starting out in the traditional way is now a young person's game and I'm not a young person and I'm not a patient person. And, truthfully, I wanted my mother to be able to read WHIMSEY and see it as a "real" book.

In addition to the blog I wrote about why I made the decision I did (see above), I've also written a piece about the self-publishing process, and you can read it here: www.meanderingsandmuses.com/2013/03/what-ive-learned-so-far-about-being.html.

How do you decide what topics to use for your two well-known blogs, Meanderings and Muses and your first Sunday blogs at Jungle Red?

That's such a good question. And honestly, I have no idea. When I first started Meanderings and Muses I knew I wanted it as a place to talk about books, but not just books. It grew to be the place where I shared some of my feelings about a wide variety of things—including Aretha Franklin's hat that she wore at President Obama's first inauguration. I've had some rants at Meanderings and Muses and it grew to become, I'm proud to say, a place where writers were proud to come spend a little time. It's no longer going to showcase as many authors as it did because I think it's had its place in the sun in that regard and it's time to just move on. And it's still trying to find its way as to where and how. Right now I'm having fun with photography and just a hodge-podge of other things, and I'm writing, which, as you well know, needs a great deal of time. There will still be writers doing guest spots there, but not as many.

As far as what I write at Jungle Reds, that's usually a toss-up too. I love being a part of that group of amazing women. I was surprised and honored to be invited and they've given me free reign to talk about whatever pops into my mind. It's often not until a day or two before the first Sunday of the month that I have a clue as to what I might want to say. It's a real effort, I have to tell you, to try to write anything that's going to be in keeping with the reputation Jungle Red and each of those women have.

You are now a veteran blogger. What do you think a really good blogger should aim for? What is easiest for you? Hardest?

I think a really good blogger should decide what the heart of their blog is and be true to it. If it's important to you to have an audience who will join a community you've created, you'll need to do that, I think. And time—you'll need to give it the time it deserves. That was easy for me in the beginning—I was dedicated to making Meanderings and Muses a special place. It's now hard for me because I'm now doing a lot of different things that I wasn't doing then. Back in the beginning of Meanderings and Muses I was working, but I wasn't working for "me." It was just hours out of my day in order to earn a living. Now, I'm doing the creative things I've always wanted to do and loving each of them as much as the other. Meanderings and Muses is now only one of them and I have to decide what to do about that.

We thank you for stopping by Crime Writers Chronicle today. Is there anything you'd like to share with us I have not mentioned?

Oh, Thelma, Thank You! You've taken a bit of a leap having me here and I appreciate it. I know WHIMSEY doesn't exactly fit into the normal Crime Writers Chronicle theme of things, and it means a lot to me that you all have allowed me a spot. It's been fun.
at 7:30 AM