Kick-Ass Women On the Case 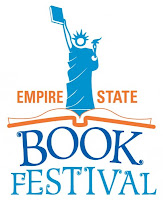 I participated as a panelist at my first ever Book Festival/Conference/Convention two Saturdays ago, and I liked it. It was called the Second Annual Empire State Book Festival and, as you might guess, it was held in Albany, my new hometown. According to the press release, 2,000 people crowded into the underground caverns beneath the Empire Plaza (the space is called ‘the Convention Center, but in no danger of competing for business with the Jacob Javits Center in my former hometown). But enough caviling; I was grateful to be picked as a panelist.

Our subject was “Kick-Ass Women On the Case: Female Detectives in Fiction” and the room was packed. We were: the always-witty, best-selling, globe-trotting S. J. Rozan (just off a plane from Tokyo where she was honored with the Japanese version of our Edgar); popular Chatham novelist, Julia Pomeroy; the well-reviewed Kinderhook author and UAlbany Professor Hollis Seamon; our Moderator, the Woodstock Editor/Anthologist Michele Slung who over the years has handled all the greats in the mystery field; and myself (new to Albany, late of the City). I once told a Judge up here that I was from The City, and you know his next question: what city? Duh!

I had the distinction of being the only male appearing with these estimable women authors. Although, to be candid, that had more to do with my having invented the panel and chosen the panelists and, with the indispensable help of Hollis Seamon, sold the idea to the Librarian-in-Charge. The Festival, like last year’s, was the brainchild of the New York Library Association, and the participants, I assume, selected by librarians.

Now, I love libraries and librarians, but their choice of marquee names as Keynote speakers to draw the crowds left me a bit cold. I don’t doubt that Roseanne Cash (Johnny’s daughter) has written a fine memoir, and Ann M. Martin, best-selling Children’s Book author, is equally good. In fact, Ms. Martin’s recent novel, “A Dog’s Life: The Autobiography of a Stray” won the ASPCA Henry Bergh Children’s Book Award. Last May 2nd, however, the keynoters were the novelist/memoirist Mary Gordon and the fantasy writer Gregory Maguire, the author of ‘Wicked”, the runaway best-seller described by John Updike as ‘an amazing novel’. A bigger crowd as I remember. But maybe the librarians are trying to level the playing field: they don’t advertise in advance of the Event . . . ever.

Yet, I really have no cause to complain. I sold books. My friends at Blackwood & Brouwer Booksellers, Kinderhook, had brought along the twelve hardcover copies of my out-of-print novel that had been a drug on their market.