Our own beloved Robin Hathaway passed away on Saturday after a moderately long illness. She was so sweet-natured that I never knew anybody who didn't like her. A kind and generous friend, devoted to her husband, daughters, and grandchildren, and devoted to writing, she wrote all her life long, though she didn't begin to get published until she won the St. Martin’s Malice Domestic Best Traditional First Mystery Competition for THE DOCTOR DIGS A GRAVE in 1997, at an age when most people are thinking of retiring. Her books are great fun.

Her posts for The Crime Writers' Chronicle were great fun too. Here's one of my favorites, the post from January 24, 2011, in which she passes the baton to the next generation. 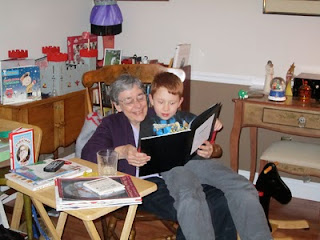 Not mine. My seven-year-old grandson, Luke’s. Last spring he had written a “chapter book” for school, entitled “Iron Man.” It had nine chapters and was even illustrated. Some highlights — a trip to the “Iron Cream Store” to buy “iron cream cones” and a gift of a zebra who wasn’t “potty-trained.” I was so taken with his tale that I rashly promised to publish it.

Luke was thrilled and gave me his manuscript. Weeks went by, then months, until one day I received a polite email from his mother (my daughter) reminding me of my promise. It seems the author was getting restless. Chagrinned, I told his mother to tell Luke that it usually takes a year to publish a book, and got to work immediately.

I typed the manuscript in 14 pt type and added a dedication: “To Mom, Dad and Maddie (his sister) with love,” and an “About the Author” section at the back, describing Luke’s seven year life, plus a photo of him in his Little League uniform. Then I took his full-color illustrations to a copy-store to copy. Being mechanically challenged (I have probably destroyed millions of dollars worth of equipment in my life) I had to ask an employee to help me. With copies in hand I went home, got out my light table (a relic from a former stint in the graphic arts), scissors and rubber cement, and began the paste-up. (I know, I know, nobody does that anymore. But I don’t have a scanner, and even if I did, I probably wouldn’t know how to work it. I had to fall back on my ancient skills.)

Once the paste-up was done, I took it back to the copy-shop and told them I would like four volumes of the book printed and bound with hard covers. This posed a problem. A hardcover binding can’t be done with less than 1 ¼ inches of paper. Luke’s book was only one inch wide. Sensing my consternation, the young woman, whose name was Erika, suggested I allot a whole page to each illustration, instead of bundling them in with the text. “That might make up the difference,” she said.

Back to the light table. The next morning I took the revised paste-up to the store and told Erika I needed the bound volumes the next day. I was going to visit my daughter that weekend and Luke would be expecting his book. She promised they would be ready. But when I went to pick them up, there was a strange woman at the counter who couldn’t find my order and claimed she knew nothing about it. I panicked ! “Where is Erika?” I cried. The stranger said to come back in an hour, when Erika would be back from lunch. I spent a miserable hour in a coffee shop imagining Luke’s disappointment. He has large, expressive, dark eyes. I was back at the shop on the dot of the hour. Wonder of wonders, Erika was there, brandishing four bound volumes of “Iron Man”! They were beautiful.


The books were received with all the enthusiasm I had expected, and Luke announced, his dark eyes dancing, that he would have a signing after dinner. (He knew all about signings, having attended some of mine.) Various relations gathered in the living room and Luke obligingly signed the four books--one for his parents, one for each set of grandparents, and one for an aunt and uncle. He even held a question and answer session afterward. One relation asked the author if he outlined. With a puzzled expression, he said, “What’s an outline?”

Exactly my sentiments. He must be a chip off the old block.