A Toast to Spellcheck 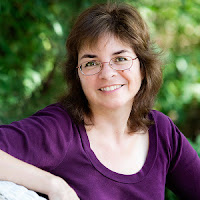 This gifted lady comes back to visit us—she last stopped by with Bob K. September 30, 2012. An attorney at law who specializes in civil litigation in Montana, she also writes dee-lightful fiction like Death Al Dente, a new series in the Food Lovers' Village Mysteries for Berkley Prime Crime and a new novel to come out in May, 2014, Crime Rib. Our good friend Hank P. Ryan says of Leslie's Al Dente, "…A tempting concoction of food, fun and fatalities."

She is also working on Spiced to Death for the Seattle spice Shop Mysteries. Wow! Such energy and talent! 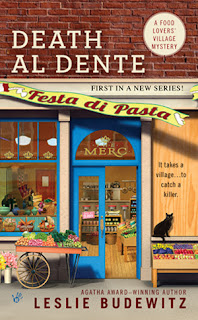 I admire Leslie as a writer, a lawyer, a very generous giving member of MWA and SinC…but she has a permanent place of honor in my life for something else very precious. After the death of my beloved red Persian, Miss Priss, she sent me her story "Hail to the Queen", about the advent and passing of her orange tabby, Autumn… who died peacefully at the age of 17… " She returned deliberately… to a place where life and death often meet…"

Leslie, I hope one day to do a children's book on Miss Priss and I will place your name in the dedication.

Welcome again to the abode of Crime Writers' Chronicle…

After copyediting Death al Dente, first in the Food Lovers’ Village mysteries, I sympathize. (If I were British, I would sympathise. Especially after all the debate with my editor and copy editor over whether it was Food Lover’s or Lovers’.)

Is drugstore one word or two? (One.) How do you spell kaleidoscope? (Word Perfect told me when I got it wrong, but could I trust its correction? Yes, as it turns out.)

Spell Check thinks bee-line has a hyphen in it. My copy editor (two words) disagrees. She wins!

Macintosh is the Apple computer. McIntosh is the apple tree in my protagonist Erin’s family orchard, the tree her father built a treehouse around using stilts. She still goes there occasionally, alone or with her five-year-old nephew, Landon. Or perhaps she goes to a tree house. I work in Word Perfect and convert to Word to submit to my editor; the two programs disagree.

(They also disagree over whether kidnaped should have one p or two; I go with one.)

Erin and I are foodies. Spell Check is not. It even puts one of those infuriating red squiggles under foodie–and tapenade, gnocchi, crostini, bruschetta, and Pellegrino. The darned thing couldn’t even spell pesto or fettucine, let alone prosciutto. And Caprese salad? Really?

Spell Check and I disagree on how to spell vinaigrette. Its helpful suggestion in response to my version? Vinegarweed. O-kay.

And all this foodie talk doesn’t even make Spell Check hungry, darn it!

Erin runs Glacier Mercantile, aka The Merc, a specialty local foods market located in her family’s hundred-year-old building, the original grocery in the lakeside Montana community of Jewel Bay. Next door is Red’s Bar, run by the formerly red-headed Ned Redaway, often called Old Ned, and his son Ted. Ted and Erin have known each other since kindergarten and he knows how to get under her skin but good. She thinks of that as getting her Jell-O up. We’d had a lovely discussion over whether the past perfect tense should be spelled Jell-Od or Jell-Oed. I resolved it in favor of peeved. When in doubt, revise.

The biggest challenge was Hank the Cowdog, Head of Ranch Security, and hero of a series of books written by John R. Erickson. Landon has been reading the books—well, his parents and occasionally Auntie Erin have been reading them to him. So naturally, when she decides to investigate, she wonders what the cow dog would do. Most dictionaries and dog books spell it two words. I’ve belonged to Border collies, and I do what they tell me to do, which is to make it two words. But the famed detective’s own publisher had used one word. Oh, what to do?

That seemed like a one-time problem, until I wrote the second installment, tentatively titled Crime Rib and scheduled for release July 1, 2014. Erin finds a copy of the children’s classic, Goodnight Moon, in the murder victim’s things. Normally we write “good night,” but Margaret Wise Brown and her publisher chose otherwise. (The book first appeared in 1947; spelling conventions may have changed.) So, it’s “good night” in dialogue, and Goodnight when referring to the book.

And how do you spell sixty-fivish? Five-ish?

Then there are the words you can never remember how to spell that Spellcheck doesn’t know. Tattood or tattooed? Embarassed or embarrassed? (The latter in both examples.)

After the first draft was completed, I realized I didn’t want to write a secondary character with the name of a major mystery writer. So I changed Ian Rankin to Ian Randall—and am very glad I didn't hit "replace all." Crankiness would have become crandalless, which would have made me really cranky!

What about words you make up? Frufalla, a variation of Turkish delight made by that vision in pink, Miss Candy Divine. The Merc’s former manager, Claudette Randall, ran off to Vegas with Dean Vincent, the local chiropractor and Elvis impersonator (he prefers “tribute artist”), who is studying for a Ph.E., a doctorate in Elvisology.

Put a squiggly line under that, Mr. Spell Check—SpellCheck, Spellcheck, SpelCzek—at your peril.


Death al Dente, first in the Food Lovers' Village Mysteries, debuted from Berkley Prime Crime in August, and is already a national bestseller. The town of Jewel Bay, Montana—known as the Food Lovers’ Village—is obsessed with homegrown and homemade Montana fare. So when Erin Murphy takes over her family’s century-old general store, she turns it into a boutique market filled with local delicacies. But Erin’s freshly booming business might go rotten when a former employee turns up dead…

Leslie is also a lawyer. Her first book, Books, Crooks & Counselors: How to Write Accurately About Criminal Law & Courtroom Procedure (Quill Driver Books) won the 2011 Agatha Award for Best Nonfiction. Leslie’s second series, The Seattle Spice Shop Mysteries, will debut in early 2015. She lives in northwest Montana with her husband, a doctor of natural medicine and singer-songwriter, and their cat Ruff, an avid birdwatcher. Visit her online at http://>www.LeslieBudewitz.com or on Facebook at www.Facebook.com/LeslieBudewitz/Author
at 7:30 AM