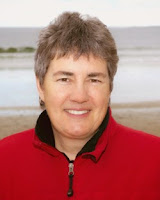 Hallie Ephron in my favorite Jungle Red Writers gave some excellent comments re the debut novel of Maine lawyer Brenda Buchanan on May 5. Now it struck me that… not only was May 5 my 99th birthday(!) but this writer was from the little mill town in Massachusetts where I made my own entrance on the planet! As I've never known any person from Fitchburg, I thought it would be fun to invite this Fitchburg gal to be a guest here.

She also studied with the noted Robert B.Parker, so I'm anxious to see if any of his genius trickles through her pages of Quick Pivot!

Buchanan, a former newspaper reporter at the Boston Globe, is now a lawyer in Portland, Maine. And my friends know how much I love Prout's Neck, a stone's throw from that Maine town—so I'm delighted to welcome Brenda to our wonderful group at Crime Writers' Chronicle today!

Thelma Jacqueline Straw (not quite 99 yet!) 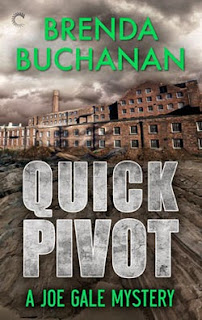 I write this early on a spring morning in Maine, which is a lovely time of year in this beautiful state. The songbirds are chorusing, the showy red tulips in our front yard are in bloom and soon my spouse and I will go to the fabulous Portland Farmer’s Market, which moved outdoors to Deering Oaks Park two weeks ago, about a week after the last of the snow melted.

Spring always is a happy time when you live in a winter-weary place, but this spring is especially happy because my debut mystery, Quick Pivot, was released in late April. I thank Thelma for inviting me to stop by Crime Writers' Chronicle today to talk about Quick Pivot and, at her urging, my long and winding path to publication.

First, of course, the book. Here’s the skinny on Quick Pivot:

In 1968, a cunning thief skimmed a half a million dollars from the textile mill that was the beating heart of Riverside, Maine.

Sharp-eyed accountant George Desmond discovered the discrepancy, but was killed before he could report it. After stashing the body, the thief-turned-killer manipulated evidence to make it appear Desmond skipped town with the stolen money. When the mill went bankrupt several years later, Desmond’s name was mud.

In 2014, veteran journalist Joe Gale is writing a feature story about the long-defunct mill being turned into condominiums when Desmond’s bones are found bricked into a basement crawl space. When Joe digs through the morgue at the fading-fast Portland Daily Chronicle, he finds his deceased mentor, an old-school reporter named Paulie Finnegan, covered Desmond’s disappearance in 1968.

Joe tracks down Paulie’s sources—now in late middle age—and begins to piece together the truth about Desmond’s death. But those who muddied the evidentiary waters in 1968 are determined to keep Joe from exposing the secrets they’ve harbored for more than four decades, even if it means killing again.

Though most of the action in Quick Pivot occurs in a fictional town, many scenes happen in real Maine places, including Portland, Kennebunkport, Cape Elizabeth and Peaks Island, where I lived for many years. If you love coastal Maine but don’t get here as much as you’d like, Quick Pivot provides a sweet virtual visit.

As for Riverside, it was inspired in part by my hometown of Fitchburg, Massachusetts, which—like so many proud industrial cities in New England—fell on hard times after the family-owned mills were bought out by large corporations in the 1960s and 70s. Having spent my youth in a community scorched by that painful economic transition, it was natural for me to set Quick Pivot in a still-proud mill town fighting its way back to respectability.

My road to the writing life began at Fitchburg High school, where I was bitten hard by the journalism bug. Like every aspiring reporter in the mid-1970s, the notion of investigative journalism lit me up. Shortly after adoption of Title IX, two other firebrands and I wrote an exposé about the enormous disparity in spending between boys and girls athletic programs. The story made powerful people decidedly uncomfortable, and resulted in significant improvement to athletic opportunities for female students. It was a heady introduction to the transformational potential of good journalism, and no doubt is why Quick Pivot has a reporter as its protagonist.

A few years later Northeastern University’s vaunted co-op program gave me the opportunity to work in the newsroom at the Boston Globe. My jobs included a reporter trainee stint on what was known as the lobster shift, riding around Boston (and sometimes farther afield) from midnight until eight in the morning, covering fires, murders and other breaking news. It was an amazing experience for a 21-year-old woman.

During alternating academic semesters I studied creative writing with Professor Parker, as in Robert B. Parker, who was adjunct faculty at NU in those days. As you might imagine, Parker’s courses were an inspiration. While he never minced words when presented with a badly written story, he was supportive. Keep at it, he advised. It’s a long process.

After graduation I moved to Maine, where I worked at a weekly newspaper based in Kennebunk, covering a variety of beats including the courts.

By the time I was ready to take the next step in my life journalism jobs already were scant in Maine, but I was too smitten with its charms to leave, so I hung up my reporter’s spurs and headed to Maine Law School. I’ve practiced law for 25 years now. I’m fortunate to have great colleagues and wonderful clients. But I’ve always remained a writer at heart.

Several years ago, I heeded the voices of Joe Gale and the other Quick Pivot characters and began writing their story. Now here I sit, on a beautiful spring morning, with my first novel out there in the world. Like Professor Parker said, it was a long process.

© 2015 Brenda Buchanan
Author of the Joe Gale Mystery Series
www.brendabuchananwrites.com
at 7:30 AM