Beware the Tread of the Cat 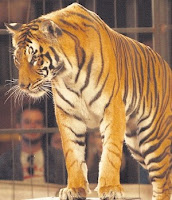 This past weekend in Albany there were two fun events: the Annual Tulip Festival (Albany, after all, began with the Dutch) in Washington Park, our smaller version of Manhattan’s Central Park, both the product of Frederick Law Olmsted’s vision. Crowds frolicked on the Park’s tree-dense grassy acres, attentive to the rock bands and fed by the united nations of cooks in their gypsy caravans and the tribe of artists hawking their wares, while the children screeched ecstatically in their Bouncey Houses. To the untrained eye, all were having a good time without exception. But not so at the Ringling Brothers Barnum & Bailey Circus at the Times Union Center (Albany’s version of New York’s Madison Square Garden). One attendee, the Albany Times-Union’s reviewer, panned the Circus as a “waste”.

Never mind the reviewer’s cracks about the acrobats, trapeze artists and clowns, but when you say that tigers and elephants are boring, I am offended, but begin to get the measure of the man. His name is Barnes and he was unmoved by the nine tigers “. . . on trapezoidal platforms, snarling and swatting at the trainer’s stick before rolling over on their backs or putting paws the size of snowshoes onto a pylon.”

What more can you ask of these magnificent cats? I cry out from memory stored up year after year as a child in Madison Square Garden thrilling to just the sight of these great cats (must’ve been their grandparents and great-great-grandparents, of course). Adding insult to injury, he blackened the name of elephants everywhere, labeling them “. . . big, sad lumberers as placid as a pond and about as interesting to watch.” Oh, yeah? I’d like to see him walk a mile in their shoes from the railroad cars through downtown in the dark, holding the tail of the fellow in front! Actually, there is a poem that nicely sums up this ghastly incident:

Breathes there the man,

With soul so dead,

Who never to himself hath said

Barnes further noted, “. . . one of the tigers defecated in the middle of his act.” Mr. Barnes' regular beat is reviewing restaurants. This, I suspect, is revealing of where he is coming from.

Once in Las Vegas, I saw Siegfried and Roy perform on stage with their white tigers (not, however, the night his tiger dragged Roy off the stage by his head). So I feel constrained to offer a word of caution to Mr. Barnes: Watch Your Mouth. The Big Cats have acute hearing.