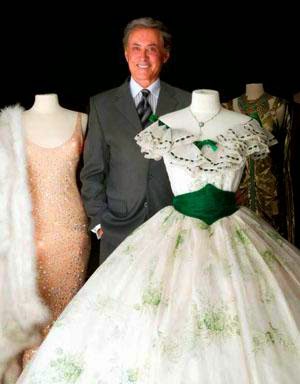 A couple of weeks ago I went to the Philadelphia Convention Center to see the Flower Show. The theme this year was moving pictures, which made for kind of a strange flower show. On the walls were big screens showing movie clips. In the middle were the horticultural exhibits. At the far end were acres of booths selling things for gardens. Hard to relate the plants to the movies. I was still recovering from a slipped disk, and so was unable to carry anything very big home on the train, and so I passed up countless opportunities to pick up garden equipment and plant materials. In fact I went home empty-handed. Oh, who am I kidding? I don't have a yard.

But just outside of the flower show was an exhibit of Gene London's collection of movie costumes—some of them, that is. To show them all would probably require the whole convention center, because Gene London's collection is immense. (You recognize his name if you're over a certain age and grew up around Philadelphia. He used to be the host of a children's TV show.) To see these clothes was why I came, as well as to see Rosemary Harris's exhibit of flowers, which in my dazed and confused state I never did manage to locate.

Gene London's Hollywood Collection was easy to find. A big sign was posted outside. I paid my five dollars, went through the door into tinsel-land and realized I'd left my camera home. But I wasn't there to take pictures. I was there to gawk. I'll tell you what I saw, and show you other people's pictures. The Collection has a Facebook page with a lot of illustrations. How tiny those stars were! How slim their waists!

Most of the costumes were women's, and most were from films of the thirties, forties, and fifties, many of which I had seen. They were all displayed on simple white mannikins. In the center of the room was Marilyn Monroe's white dress from The Seven-Year Itch, positioned over a grate with a fan so that the skirt blew up. That outfit has become a cliché, even being cast in bronze or whatever as one of those hideous Seward Johnson sculptures. Other outfits were more interesting to me. 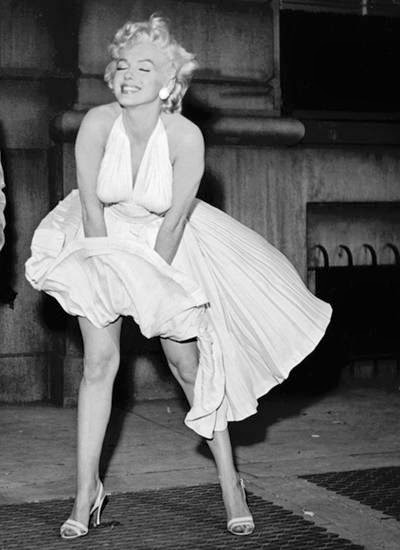 I got to see the red dress Audrey Hepburn wore in Funny Face after she had been transformed into a fashion model, a garment of exquisite simplicity. Her Paris wardrobe was designed at Miss Hepburn's insistence by Givenchy, to Edith Head's great displeasure. Let's face it, Edith Head may have been Hollywood's greatest designer in her day but she couldn't pull off real Paris fashions. Nevertheless it is Edith Head's name that appears in the movie credits. 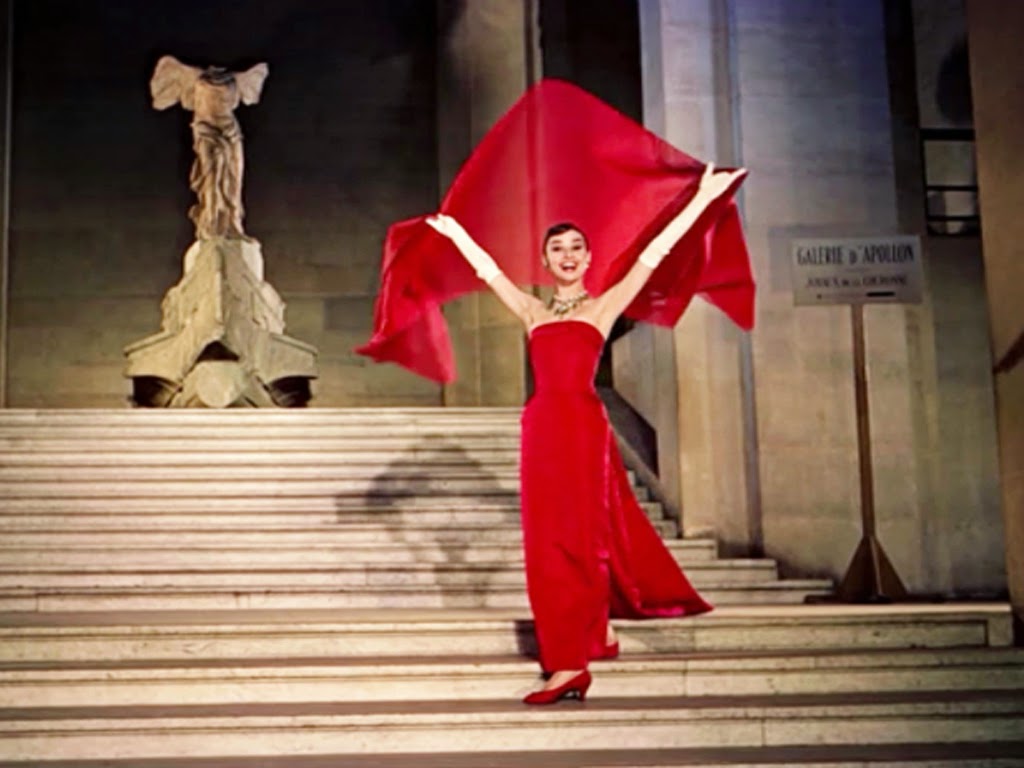 The black satin strapless gown Rita Hayworth wiggled around in when she sang "Put the Blame on Mame" in Gilda was there. In the movie she did a strip-tease by taking off her long black gloves, and it was amazing that she didn't fall out of the dress. Jean Louis, the designer, must have glued it on her. Without Miss Hayworth in it the dress seemed lifeless. In fact, here she is, doing her thing:

Other dresses, elaborately shaped and decorated, made a satisfying spectacle all by themselves. 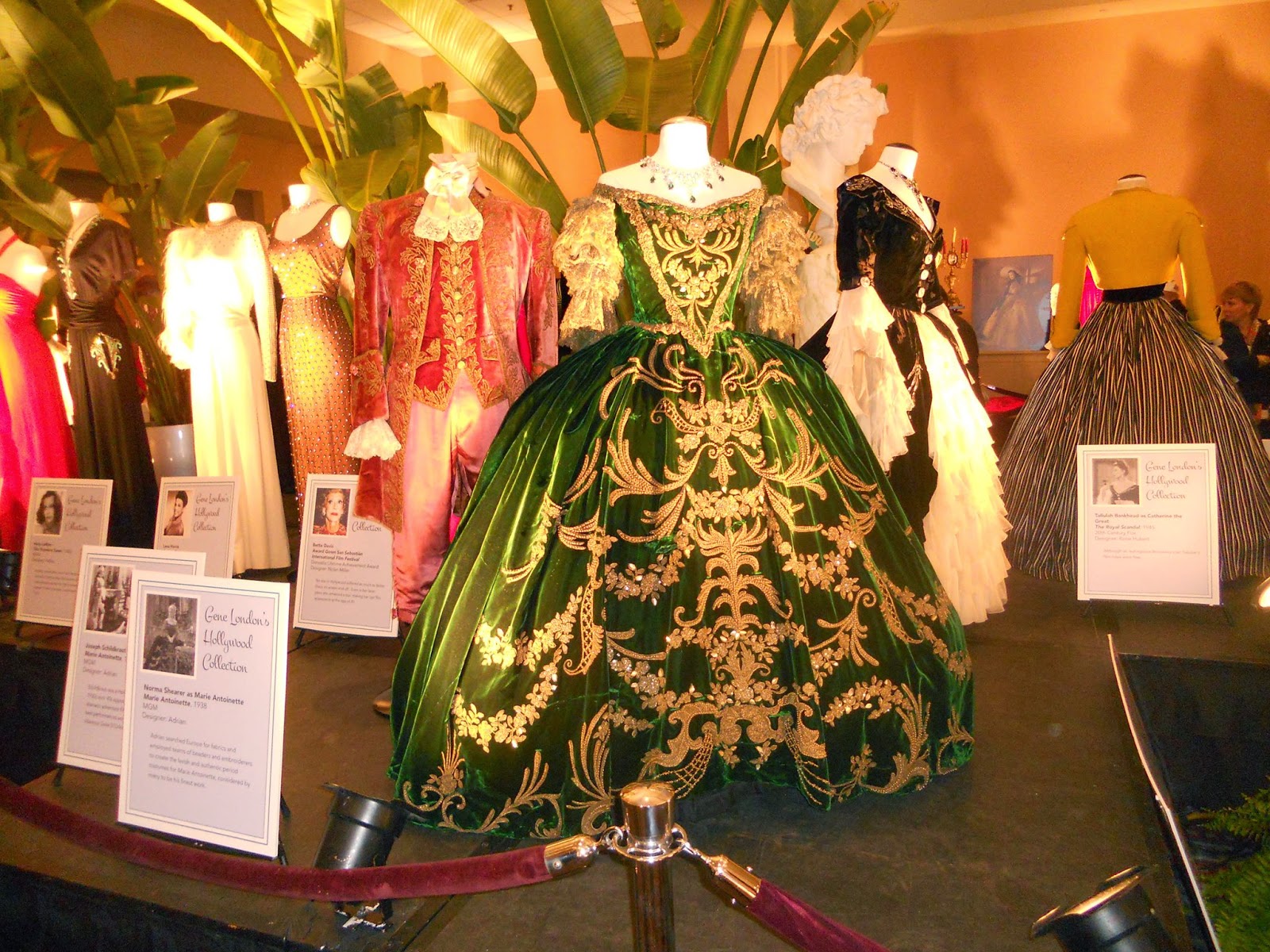 There were men's costumes as well, fancy historical fripperies and also a tweed suit worn by Fred Astaire, shown with a dress of Ginger Rogers. Then there was a simple rag that Charlton Heston wore in Planet of the Apes. 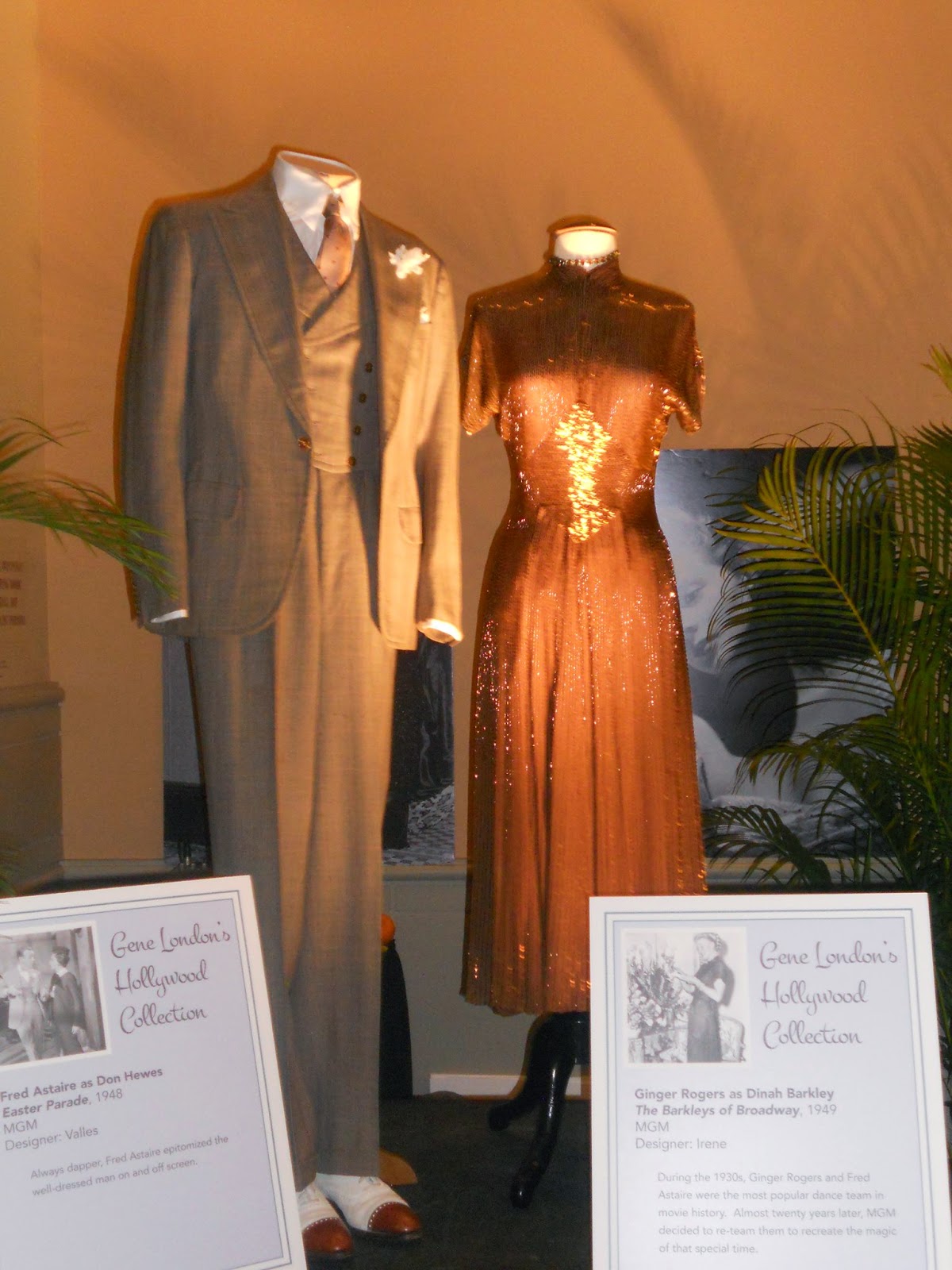 Not all the exhibits were from the movies. Some were gowns that the stars had worn to awards ceremonies. One was Grace Kelly's wedding gown. I can't imagine letting that go out of the family, but they did, and you can see it, the next time Gene London has a show. I can't wait. I'm going to put him on Google Alert to see when that might happen.