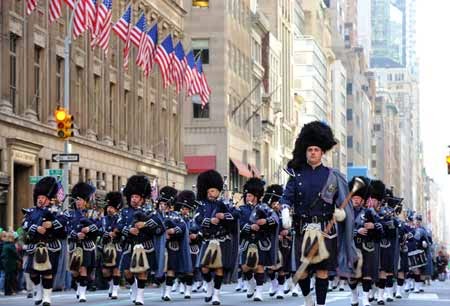 It’s Saturday and it’s raining but if I were back in the City, it wouldn’t matter; it’d roll off my back. But I’m in Albany, where I live now. Don’t say anything, like “How can you call that cesspool of corruption home??”, as a friend indelicately put it when I announced my plan to move. Come to think of it, Rose’s response when I first broached the subject: “What??? Where!!!” fell short of unalloyed joy. This depression I feel in my bones on March 17th is only for today. ‘Buck up, boyo,’ the Irish spirits whisper, ‘the Thruway is a two-way street.’

Modern Albany was practically invented by the Irish, after they’d ousted their Dutch Protestant ‘betters’ who’d held power since the Civil War. Dan O’Connell won at the polls in 1921 and his Democratic Machine ran the City forever after, today still. Dan came from the Irish South End where his father owned a Bar. He cannily persuaded Erastus Corning the Younger, a Brahmin scion, to throw in with him, and the rest was history. Corning was Mayor of Albany for 42 years till his death in 1983, but if you wanted a big enough favor, you visited Boss Dan O’Connell, hat-in-hand, at home, up until he died in 1977. These were the days of the Ward Men whom you met on the street or in a Bar on Election Day to receive $5 for your vote. An Irish version of The Godfather.

Two things I know about St. Patrick’s Day in Albany: Go to the Ancient Order of Hibernians Hall on Ontario Street for the corned-beef-and-cabbage, boiled potatoes, carrots and two kinds of Irish Soda bread; and skip the Parade. The Parade actually occurs on the Saturday before the 17th. How un-New York is that! I went to it once, and was appalled. The Albany cops couldn’t control the corners at the intersections along Washington Avenue (or didn’t know how). On Parade Day, The NYPD would post officers on foot and horse on both sides of Fifth Avenue from East 45th St. to 86th St., then down 86th to Second Avenue, the last stop. (Of course, the APD has 350 cops while we had 35,000.) There were
Pipe Bands in the Albany Parade, but their leaders did not look like Detective Finbar Devine. Truly, no other human ever did. Six-feet-five inches, broad-shouldered and bull-chested, perennial Drum Major of the NYPD’s Emerald Society Pipe and Drum Corps; in kilts and the high Black Bear Hat, he strode up Fifth Avenue, marking cadence for his men with swings of his shillelagh-sized baton, like Finn MacCool straight out of the mists of Irish Myth. Finbar has been gone from us a good while now, doing his thing in the celestial Precincts, I like to think.

In The Day, it was a mix of pride and wild joy I felt marching up Fifth in the first rank of a uniformed column as a Sergeant of Police. We were hundreds but the crowds lining the route were thousands. Past St. Patrick’s Cathedral, the Cardinal, Mayor, et al preening in the grandstands on its steps, we moved past smartly to the wail of the pipes. New York loved us That Day and told us loudly. At the end of the march, we’d hit all the Irish Bars along Second Avenue, from 86th to 22nd Sts. Still in uniform, the drinks were free as were the women. Our destination was Molly Malone’s Pub, around the corner from the Police Academy on East 20th St. You’d have to shout over the din to be heard, the pipers competing with the juke box blaring out Danny Boy and The Wild Colonial Boy. I was in my 30s then and pronounced it good.

The world moves on; me, too. I know Albany cannot have the number and magical élan of those New York Irish bars I knew so well, now long gone. The world is drearier for it.