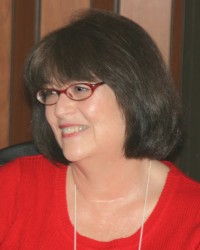 Sunny Frazier wears two hats, that of a crime writer and also the hat of an acquisitions editor of a press that publishes crime writers, some of whom have been guests on The Crime Writers' Chronicle, like our colleague Marilyn Meredith. (Other authors with the Oak Tree Press include Ilene Schneider, Radine Trees Nehring, Morgan St. James, and J. Michael Orenduff.)

Our guest today lives where they have verrry hot summers and winters laced with dense Tule fog!

Much of the material in her crime novels is based on her own life in law enforcement, in the Sheriff's Department, with an emphasis on her strong interest and expertise in astrology.

In company with Sue Grafton, Lawrence Block, J.A. Jance and many others, Sunny is included in The Mystery Writers Anthology, edited by Jean Henry Mead.

As a former WAVE in the U.S. Navy, Sunny has seen the world! And now writes about it! You can visit her at www.sunnyfrazier.com ...but today we are delighted to have her stop by Crime Writers' Chronicle.


You wrote somewhere about the "dense Tule fog" in the winter, near where you live in the San Joaquin Valley. Can you tell us what this is and if/how it affects your writing?

Tule fog is the bane of the Valley. It sits low on the landscape and holds us hostage in our homes for days at a time. I look across the street and can't see my neighbor's house. It's dangerous to drive in. As a child, we would play hide-and-seek by running into the fog and standing still. In my book I say "It comes like an unwelcomed mother-in-law who stays too long." There is a sense of isolation and foreboding that drifts in with the murk. That's our winter white. 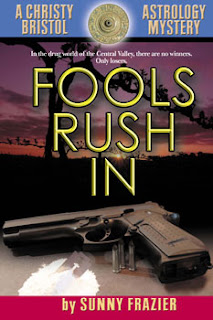 As a sheriff for several years and as an astrologer – these are wonderful areas for a mystery writer! How do they feature in your novels?

I wasn't a sworn officer, I was support staff at a high level. For novels, I don't have to think up plots. I have all the cases from those years in law enforcement, especially in the narcotics division, to pull from. The characters in my book are based on the people I worked alongside. Not perfect individuals, but all with a sense of honor and duty. I will not write about "bad cops." The astrology was fun because I actually do cast horoscopes for my characters and sometimes adjust the plot to what I learn. This drove my writing teacher crazy! I try to present a different aspect of astrology to readers in each book and show the practical application (even if it's to catch killers).

Can you describe how you felt when you went undercover?

I was undercover only to the extent that I was not allowed to tell civilians where I worked. Even people at headquarters didn't always know where our narc unit was located. Our photos were not included in the yearbook. There is a sense of detachement with the rest of the world, but an intense closeness with the people I worked with. As the only woman in the unit, I would wave as my team went off to busts, knowing that I might be the last woman they saw if they were killed in the line of duty. I represented their wives, their sisters, their girlfriends, their mothers. They were incredibly loyal to me and I would do anything for them. But, I was also left alone in the office and many times drug dealers would figure out where we were. It was frightening to come to work and have my office staked out. How many secretaries deal with that? I also had to deal with snitches, parolees, dealers we turned because I was the contact person to relay information to the detectives. The criminal element is an interesting group. They never think they are doing anything wrong.

You were editor of your high school paper - I was too, and found it helped my writing on a schedule later on. How did this help you in your later career as a crime writer?

I also worked on a college newspaper and city newspaper. Journalism instills the idea of deadlines, writing tight and word craft. I was the 2nd female newspaper editor in high school, not exactly good for popularity. I was the only female reporter on the city newspaper and dealt with wage discrimination. Their reasoning is that I should have a man supporting me. That killed my love of journalism and turned me to fiction.

Do you use your days in the Navy, as well as your time as a sheriff, in your writing?

I concentrate on my time in law enforcement. Many people want me to write about my time in the Navy, which was at the tail end of the Vietnam war. It was a strange time – birth control pills issued in bootcamp, co-ed barracks, short uniform skirts and the men got to grow beards and mustaches. Admiral Zumwalt wanted us to be like the college kids who were protesting the war. My escapades in foreign countries would make the Navy cringe. I've never written about it and am reluctant to as I'm not sure it's relevant today. It was a very strange era, but I loved every minute.

What is your favorite genre?

International thrillers. I'm a Daniel Silva fan. I also like a good assassin.

Can you tell us what the Posse is?

This is a group I rounded up to teach marketing. Anyone can be a part of it, only an email address is needed. There's no charge. We're about 125 strong. What we do is support each other by bombarding websites that host a Posse member and driving the participation numbers up. The site owners don't know what hit them! Many of the Posse members have gotten to know each other and actively cross-promote. I also put up "Posse Posts" on my website. These are links to important info I find all over the Internet that will train people in marketing skills and understanding of the industry. I think I can cut five years off a newcomer's career path if they follow the herd.

Do you have any conflict with your job as a novelist and as acquisitions editor of Oak Tree Press?

I don't review books because it would be obvious favoritism. My publisher, Billie Johnson, trusts my judgment, lets me have a say in the business. I do have to keep my position in mind when I'm out in public representing the Oak Tree Press. I mind my P's and Q's (to some extent, anyway).

Your job as editor is to rule out "cuss words" ... what do you do if you have an author you love who uses them?

I actually count the number of times the words are used and "politely" suggest that the author discard them. If they refuse, I reluctantly pass on the manuscript. Our readers are primarily middle-aged women and I've never heard one of them say, "I love to read the word f--k over and over."

I did give Christy a cat named Shamus. He's actually a clue in FOOLS RUSH IN. In WHERE ANGELS FEAR he is fairly possessive of Christy's lover. In the novel I'm working on, A SNITCH IN TIME, he's left in the care of a roommate who spoils him. Christy's going to have to reinforce some rules when she gets home.

You seem to love your life now as a writer – how does this come across in your novels?

I think people will pick up the fact that I love the area I live in – which is not easy for most people. I call the landscape "cranky." I don't paint a rosy picture, there's nothing idyllic in my descriptions. I'm brutally honest. But, I love the agricultural landscape, the diverse population, the fascinating crimes. I love the 110 degree summers, not so fond of the damp winters. I treasure the support I get from the locals, who are excited to see this area featured in my books. We take up most of California, but are eclipsed by writers who set books in San Francisco and Los Angeles. I just want to set the records straight.

What would you like to write about in the future?

I read a lot of historical fiction. I'm going to pull that element in on the next book. I'm going to get a bit medieval on everyone.

What kind of research do you do for your mysteries?

Other than doing horoscopes and refreshing my memories of certain cases, not much.

When you begin a novel, what comes first – character, plot, setting? How do you usually plot your stories?

I have my characters, the setting is handled like another character and the plots come from parts of my life. I always have a sub-text I want to make in a book. The first book, Christy learns the value of her life. The second, she begins to explore her sexuality (she's a late bloomer). The current book asks "Who's the better friend," in her female relationship. I try to find a way to use astrology a bit differently in each book and then put Christy in a corner and let her figure it out.

What would you like us to know about your writing we don't know?

I'm a pantser, but the whole plot is in my head. I do love it when I watch the words take off in a scene I hadn't planned on. I love the look of words on a page, literally: letters next to each other, white space, different paragraph lengths. I'm a little too fond of alliteration. I love using words people don't bother with, but not the ones they have to look up. I don't try to impress, but every now and then I will pull out all stops and hit the reader with a sentence that's pure gold. I want to make jaws drop. I want writers to think "I wish I'd written that." It makes my ego happy.

Many thanks to you, Sunny, for dropping by Crime Writers Chronicle today. We look forward to your next book!