A Visit to Ringing Rocks 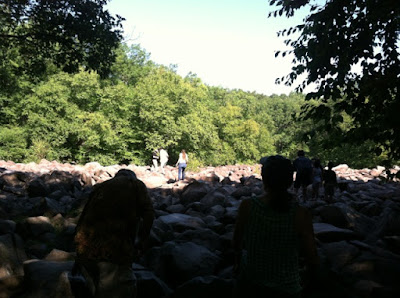 This week I suspended thriller-writing operations to entertain visiting family from Ottawa. We spent a lot of time eating, because that's what I like to do best, but we also went for walks and hit a tourist spot or two. One of the more interesting places to visit in the Lambertville area is a county park in Pennsylvania called Ringing Rocks, so named because of the curious property of the rocks to ring like iron when struck. A beautiful and not exhaustingly long hiking trail passes by the rock field and leads to a waterfall and a cliff that overhangs a gorge.

The rock field is a terminal moraine left behind by a glacier at the end of the last ice age. Nobody knows why these particular rocks ring like that. If you're young and spry it's fun to hop from rock to rock. We neglected to bring a hammer with us, but many tourists have brought hammers with them over the years and banged on the rocks until cup-like depressions formed in them. Members of the Sierra Club would faint at the very notion of vandalizing a natural formation in this way, but, hey, what do you want? It's Pennsylvania. 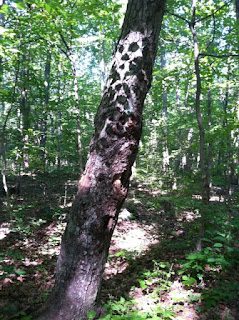 We were pleased to find a simulated rescue operation in progress. We had noticed a heavy rescue truck from Virginia in the parking lot, and a pile of large, brightly-colored backpacks beside the trail as we approached the waterfall. When we came to the end of the hiking trail we found a group of men standing on the cliff. They had strung up a zip line leading deep into the gorge, and when they saw us, they promised to give us a show. "We're going to rescue a kid," one of them said jovially, in a thick Virginia accent. You could tell it was just for practice, first of all because nobody seemed upset, and secondly because they had come so far. If a real accident victim had to wait for a bunch of guys to drive a truck up from Virginia there wouldn't be much left of him by the time they got here.

How I cursed myself for having lost the camera before we left the house. All I had was my cheap old IPhone, with no zoom function. 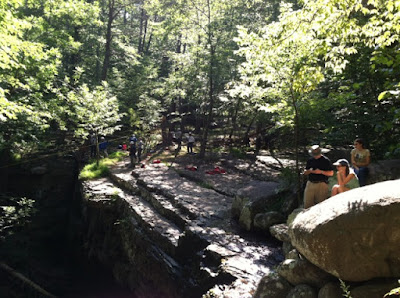 If I were any sort of journalist I would have asked the guys why they came here when there were so many cliffs and gorges in Virginia, whether they were training the locals or simply working out, and a number of other questions that didn't occur to me until just now. I have a confession to make. I am terrified of heights and declivities. Standing by the side of a gorge, and especially watching my beloved relatives teetering on the edge, causes me to feel a nearly intolerable degree of terror. The only thing worse is the presence of small children. So when another family with two small children showed up, and the five-year-old took the three-year-old's hand and skipped up to the edge, I had to leave or start screaming. Luckily they went away again. The rescue began in earnest. Slowly the rescuer and the simulated accident victim in a Stokes basket (a real kid) worked their way back up the zip line to the waiting men on the cliff. 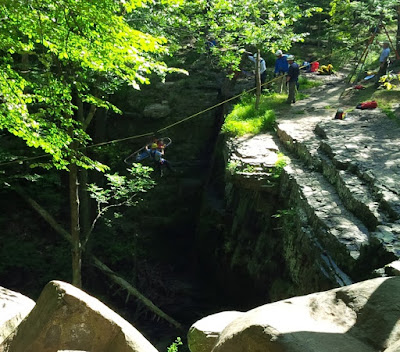 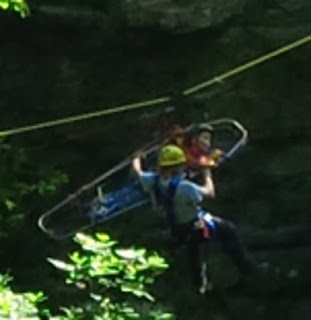 So that was the visit to Ringing Rocks. The gorge is lovely. You should go there. Bring a good camera and a small ecologically approved hammer.