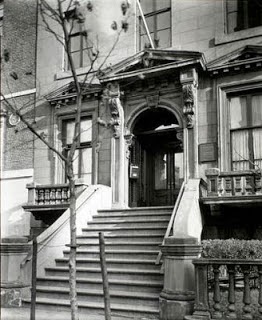 The last time I ventured into the City I grabbed a handrail in the train station that was covered with City germs (or perhaps with traveler germs) and contracted a case of bronchitis that took me all winter to shake off. Nevertheless, a meeting of the New York Chapter of the Mystery Writers of America took place on Wednesday evening that I absolutely could not miss, featuring a presentation on noir films by the charming Scott Adlerberg. It was also an opportunity to hobnob with some beloved friends I hadn't seen in a while. Also a chance to dine at the Salmagundi Club, a wonderful old brownstone mansion on a stretch of Fifth Avenue that used to be very tony a hundred or so years ago. So it was worth the risk of encountering a few pathogens.

As I expected, I had a swell time. The Boeuf Bourguignon was delicious, the apple tart sublime, the friends in good health and cooking happily along with their writing careers. The presentation was entertaining and enlightening. We saw little scenes from Double Indemnity, Out of the Past, Touch of Evil, and other swell movies. Directors who came to Hollywood to get away from the Nazis were responsible for much of the bleak pessimism that informs the Noir worldview. Europeans, you know. They have this attitude. And of course Orson Welles.

Thanks to Sheila York, who shepherded me on and off the unfamiliar subway, I happily caught the 10:11 train back to the Hamilton station, only to discover that in Hamilton it was raining.

Now began the truly noir part of the evening. I can barely see to drive on a clear night, let alone when rain is falling. I think it's these glasses. Anyway, I got out of the parking deck and onto Route 295 pretty much by memory. From there I was safe enough, traveling ten miles under the speed limit in the slow lane, until I got off onto 29 and turned north for Lambertville. On 29 the rain was joined by drifting clouds of fog. By then it was after midnight. Hardly anyone was out. Deer are a constant hazard on that road, so I was looking out for them, even though I understood that if they were there I probably couldn't see them. If those puppies got in my way they would be dead meat. Then I came to a sign that said, "Road Flooded." The road wasn't blocked off, so I knew the flooding wouldn't be catastrophic, but I slowed down a little more.

I drove through puddles. For those of you who don't know that stretch of road, there is a stone wall on one side of it and a canal on the other side deep enough to swallow a Toyota with a blind old lady in it. Suddenly another car came around a curve toward me, frantically flashing its lights.

What was I to think? I didn't have my brights on, having turned them down when I saw the lights of the other car coming. I thought, there's a herd of deer on the road, or a tree down, or a wall of water. Or a policeman. But why would I fear a policeman? I was cold sober, I was not a kid, and I was doing thirty-five miles an hour on a forty-five mile an hour road. I slowed down a little more, hypervigilant, and drove on.

I had almost reached the city limits of Lambertville when the lights of another car appeared behind me. I speeded up a bit so as not to be in its way and moved to the right as soon as we reached the four-lane stretch of the highway. The other car exploded with emergency lights. A cop! He was after me! I pulled over as far as I could and fished for my paperwork while he sat in his cop car checking my license plate for wants and warrants.

"Can I see your license and registration?" And so it went. He claimed to have stopped me because he clocked me at twenty-seven miles an hour, which is too slow. "There wasn't anybody behind me," I said. "I thought it would be okay." I refrained from mentioning that I seem to be too blind to drive at night, for fear he would yank my license and force me to walk the rest of the way home.

"Driving too slow is as dangerous as driving too fast," he said. I said, "Thank you, officer." We parted cordially. I knew he was just looking for drunks and stoners.