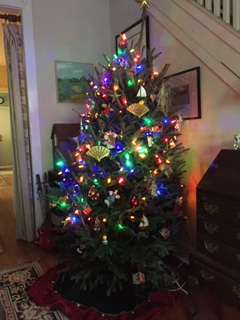 It's raining in Lambertville this morning, looking like another warm day today. Our Christmas tree is up. The tree is modest this year, not too tall, rather slim. I like them slim some years. They remind me of my first Christmas at Douglass, in the dorm called Corwin C, where we put up a downright scrawny tree and draped it all over with junk jewelry. In those days people didn't steal your stuff if you put it out in public. Maybe it rained. We were very merry. There were, as I recall, sixteen girls in the dorm.

No boys. Douglass was a women's college in those days, not an appendix of Rutgers • the State University. Sixteen girls, six of them Jewish, four of them Theater Arts majors (an overlapping set), one anti-Semite, one Chinese Jamaican, one married woman whose husband was at school on the West Coast, one budding beauty queen who together with her roommate played the baritone ukulele and sang close harmony, and one girl who used to weep and scream at her mother on the phone, a pay phone in the downstairs hall right outside where I was trying to sleep.

But the screaming girl didn't last until Christmas. She was a pretty little thing. I used to listen to her shouting at her poor mother and think, that's amazing. If I shouted at my mother like that God would turn me to stone. She went home for Thanksgiving and never came back.

For those of you who are younger than I am, and that would be nearly everybody at this point, a few words about what dorm life was like in those days. There were rules. No men in the rooms. Or, you could have a man in your room, but you had to holler first—MAN COMING UP, or something like that—and keep your door open, and everyone had to have two feet on the floor at all times. We had an eleven o'clock curfew. You could sign out overnight to a relative's house, or the house of a fellow student's parents. You could lie about that, though I never had occasion to. Douglass was on an honor system. That meant if you messed up you had to turn yourself in, and if your sisters messed up you had to rat them out.

The building itself was pre-war, high-ceilinged, steam-heated, sparsely wired, anciently plumbed. You could make tea out of the water that came from the hot tap but it tasted funny. You could get the heat to come on a bit higher by wrapping ice in a washcloth and putting in on the thermostat. If anything terrible happened in the night there was a whistle for you to stand on the doorstep and blow. It would summon two watchmen, one tall and skinny, the other short and fat, with their eyes rolling around in their heads, wondering what was up. They did not go about armed. There was no need to.

At set intervals—Once a week? Once a month? I can't recall—we had house meetings. One of the senior girls was house chairman. I want to call her Ellen Silverman, but that can't be right, that was Spenser's girlfriend. Anyway, her name was something like that, and she would call a meeting. At eleven o'clock we would all be in the living room in our jammies and bathrobes, with our hair up in curlers and stuff on our faces, for the meeting. All I remember from those meetings is a lot of giggling. There must have been serious business discussed but it escapes my memory.

The one meeting I remember is the Christmas party. Somewhere we got hold of good things to eat and drink. No alcohol, though, because it was against the rules. Marilyn Rockafellow (She would go on to become Miss New Jersey that year, but that's another story) and her roommate, a talented girl whose name escapes me, sang songs the roommate had made up. We all sang Christmas carols. The Jewish girls joined in, because they were good sports. Then we sang Hanukkah songs.

The party wasn't about the birth of Our Lord, anyway. It was about the music, and the camaraderie, and the beauty of life and youth.