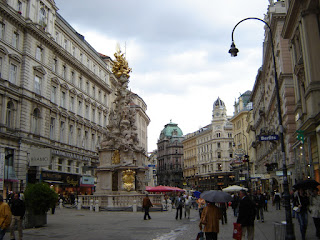 I have decided to take the bus to Vienna. It is only about $40 round trip. And I found a room in Vienna for $56. I hope it is not too horrible. I just wanted to see one of those classic European cities. This is more like Pittsburgh on the Polish Plain or something. I don’t have any German, so it will be an adventure, but I am game. I leave at 11 tonight, and get there at 7 am.

I needed a caffeine fix, and so found a kind of 7-11, mini mart gas station convenience store behind the hotel. They have a lot of the usual stuff, beer and soda and junk food. They also have vodka. I got a lot of Pepsi, they don’t have diet, usually, and when they do it is called “lite.” I don’t know if it is comforting to know you can get caffeine, sugar and alcohol along with your gas in Katowice as well as Albany. I’d like to give the world…….a coke?

Drank a lot of beer today. Reminded me of college. You start out thinking this is great, I can drink as much as I want, and then you realize you didn’t want to drink all that much. And then you get a hangover anyway. It seems like everyone has a little English in their arsenal, even though I have no Polish in mine. The weather during the day is quite nice, although the temperature plummets as soon as the sun goes down. In the early morning, a fog that is not quite a fog, but something perhaps more synthetic and pernicious, covers everything. Seems like everyone walks on takes the Tram. I keep being surprised by all the odd foreign, tiny cars. I guess us Americans think the whole world is supposed to choose to be just like us. They are really tough on jaywalking here. Everyone waits patiently for the pedestrian light to change. Some of us have gotten impatient and gone against the light, only to have the cops stop us and yell at us in Polish. We got off by pleading ugly American ignorance. Matteus says he has three unpaid tickets sitting on his dresser at home.

Off to Vienna tonight. I changed to the train, which is still only $60 each way. I am a little afraid, to be honest, Stranger in a Strange Land, not knowing where the traps and lairs and snares are, but I can’t pass up this opportunity. The romance of Vienna, the third man, John Irving’s novels, etc. I think a train is more cool than a bus. When I was taking the bus, I had this image of people sitting on the roof and chickens running around, but that must be South America or Mexico. You would freeze to death riding on top a bus in Poland. We go through Czechoslovakia to get there. And they even have Wi-Fi! What could be bad with Wi-Fi?

I turned 53 on this trip. November 1st. All Saints Day. A big deal in Italy, All Saints day. And in Poland too. The tour guide explained the night before, our Halloween, is the time to go out and party, and then you go and visit your dead relatives with a hangover and some flowers at their gravesides the next day. That is, unless you did something like drinking and driving and got killed and joined them here in the cemetery.

I am staging a rebellion. I am not going to see one more statue or painting or old monument. I am going to Vienna, to sit in a café and write like some real writer. Or at least like a guy who wants to be a real writer. And besides, familiarity is breeding contempt. David, whom I love dearly, asks the tour guide stupid questions, has more special requests at dinner than Meg Ryan in When Harry met Sally, and always manages to somehow hold up the plane or the tour bus. Our other friend Ted is loaded, and always talks about how he is going to give his money away to some charity at the same time he is trying to cadge free beers off you. Don, who is a good guy, is bright, but intense and worried. He has been talking about his colon and Metamucil and a possible blockage for three days now. I want to take a plunger to him, or a snake. Roto rooter the guy into silence. Oh, and the singers don’t get along with the piano player, and they don’t like to take direction, and yada yada ya.

Took off last night on the midnight train to Vienna. Trapped in a compartment with two Slavs (Poles? Russians?) who I could not decipher. They talked loudly for the whole six hour trip. I could make out Beider Meinhof, Roosevelt, Churchill, realpolitik, agitprop, Ben Gurion, Palestine, and not really anything else. Politics, but it could be of the far right or far left variety. From the volume, I don’t think it was right down the middle of the old plate. While they expounded and expatiated, I dozed fitfully, dreaming I was in a movie, or movies, and it had something to do with Truman Capote and In Cold Blood, and I had to run up a very steep hill like in The Loneliness of the Long Distance Runner, and I kept reminding myself it was only a movie when it turned into something like Carnival of Souls, where I think I am alive and can only stay out of the graveyard until I realize I didn’t survive the car crash I thought I did.

We got to Vienna late—two minutes late. Pretty good. It is a pretty crappy part of town, looks like. The Banhoff Meidling Station. It’s pretty cold outside, and I set off with my heavy back pack and my money belt around my waist, savvy and intrepid traveler that I am. I get a map but four attempts to find the city center by Tram and bus failed, so I begin to fret. A bus took me to an industrial area and then a rural one, and I figured I could either stay on and get more lost, or stay on and find the city again. I gamble on staying on, and soon we come to an “underground” stop (the subway) and I am golden. There are only six lines, and even I can figure out how to get around.

By now it is not freezing at all, I am sweating. I order a beer in a café and sit for twenty minutes waiting for the bartender to come back and see if I want another one. I wander out and look at St Stephen’s square. I am exhausted. They have horse drown carriage rides, and I feel bad for the horses, like I always do when I see them in Central park. Like the comfort and romance for the few must be paid by the blood and brute labor of the many.

I don’t want to miss check in time at the Ramada on Greisinghoffgasse, so I set off on the subway again. Did I mention it takes .50 euro to take a pee? This is the only way Europe does not seem kinder and gentler to me. People walk around and take long meals just for the heck of it. They push babies in strollers. There are bike paths everywhere. Public transportation is a viable option. Store owners stand outside their stores sweeping the sidewalk with care.

My neighborhood is a little Greenwich Village, an open air market right across the street, with book stalls and restaurants that are little more than shacks. You can get beer everywhere (I will find out later you can even get it at the movie theater). Kids play basketball in a little park. They are OK, but would get slaughtered in Bed Stuy or Harlem. They play soccer too. There are betting parlors, and instead of what I called a candy store as a kid, you buy candy and cigarettes and gum and the paper in a Tabak Shop. A lot of these are run by Muslims.