Saw the Borghese Gallery. That Bernini guy can make sculpture that is not statuary in the sense of standing still, but seems to actually be moving. For a second, I thought David was going to sling his shot at me. Caravaggio, who apparently was a bit of a prick, has got some pretty great stuff too. I liked St Jerome writing the Vulgate the best. 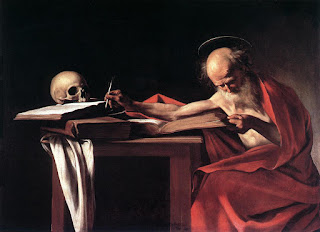 There is dissension in the ranks. We were told, or at least everyone thinks we were told, that transportation to and from Rome was provided. Apparently, now, it costs twenty euros a day. And the pool is filled with algae, and the gym is a couple of dumbbells stored under a tarp in a storage shed. Lots of grumbling all around. The weather is beautiful. Sunny and in the low 70’s. Took a double decker bus tour around the city. Weird, and great, how the styles from all the centuries are stacked higgledy-piggledy next to one another. The Termini (their Grand Central Station) is chaos itself. The vendors in the shops range from the brusque to the outright rude. I saw two beggars, and one homeless person. Dinner at an outdoor café (spaghetti Bolognese and some sausage dish) was nothing you could not have gotten in NY. Tomorrow we take a walking tour. We have figured out how to get trains and cabs, and have given the bus company the big raspberry. They are always late anyway. People are starting to talk about Italian time. And the singers have decided they are not chipping in for the bus in any event.

The prostitutes park on the shoulder of the road on the way to the train station. Quite out in the open. Some of them look quite beautiful, but I think I will abstain. I guess Rome is a city of both pagan excess and Christian asceticism. I don’t tend towards the latter, but have a feeling an assignation with a hooker would not turn out well for me.

There are regional differences here as in America. I heard our tour guide refer both to Northerners and Southerners, Florentines and Venetians and Sicilians. I am not sure what the differences are yet, but I will keep my ears open.

OK, I am getting tired of statues and paintings, statues and paintings. Enough. Some of Caravaggio’s stuff is pretty impressive. It is hard to explain—they are so bold and hit you so hard. But in a good way. Finally had a really good dinner. At an outdoor restaurant. Or an indoor outdoor one. Most of them are like that. It was Halloween, and at night the little beasties and goblins and Ghoulies were out in force. The drivers really are terrible. And you take your life in your very hands when you cross the street. My friend David is driving me nuts. I love him, but he is very OCD and very particular. One of those people who always wants things in a special way, off the menu, off the map, off the wall. He got mad at a store clerk for getting thumbprints on his post cards. And we went to a café where they were selling different things by the pound, and he wanted them to mix everything together for him, a little of each.

There is a revolution brewing. Or at least a minor uprising. We’ve decided the tour manager ripped us off on the tours. On one of them, he charged us each $92. Later we found you could go on that one (the Vatican) for fifteen Euros. So there has been a lot of complaining on that count. The internet works only on the sun porch outside the main office (sometimes). People are pissed. Day after tomorrow it is up at 3 am to head for Krakow. Why Krakow? That is probably what the members of the party that settled it said to their leader.

Quite a day. One of the guys, Don, an older guy who is a math teacher, and I went off on our own. The subway has as much graffiti as NY. I think graffiti was originally a Latin word. I took a cab, and the cabbie took offense at the driving of another car. He pulled alongside and let loose with a string of invective, real juicy expletives. I joined in. I caught imbecile and mongoloid. I tried y tu mama tambien. That was fun, kind of a cleaning of the emotional pipes. Kind of like NY.
We found an Irish pub, of all things. They were playing saccharine American music, though. No Pogues, no Chieftains, no Irish Rovers. I didn’t say anything, keeping in mind the cabbie’s titanic tirade. They have an Italian beer called Peroni.