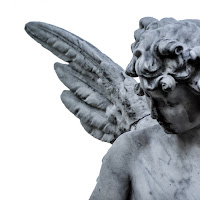 "I saw the angel in the marble and I carved until I set him free."
—Michelangelo

- Contemporary themes…
- Real flesh and blood characters…
- Brainy writers you can communicate with at meetings, or call or email…

You read them all, enjoy most, maybe wish you could have turned in "THAT" novel to your editor this week!

If your thing is international thefts, sex scandals, poisonous foods or French prostitutes — some fellow crime writer will have the book for sale!

Pick a topic that made the news not long ago: Mr. Strauss-Kahn, a onetime presidential contender in France, resigned as head of the International Monetary Fund — after he was accused of sexually assaulting a hotel housekeeper in Manhattan!

How would your favorite writer handle that one? Think, for example, Larry Light, Alafair Burke, Hank Ryan or Jenny Milchman…

You ponder for a moment and YOUR brain tells you at once which authors might tackle that theme!

Or food poisoning at the Mayo Clinic. Again, you can imagine some writers taking on that one and some not touching it with a ten-foot pen!

Back to Mr. Strauss-Kahn… There were many real-life issues in his alleged crime… He was also accused of involvement in a prostitution ring in Lille, France. A Serbian high level official said Mr. S-K's history had no bearing on the guy's financial expertise. That questioning Mr. S-K's economic acumen would be like questioning Pablo Picasso's powers as an artist because of his treatment of women!

Which writers on your FAVE list would do the job?

Crime, whatever the genre, color, size, type, location, is brain food for you and your fellow writers.

A crime novelist is: A hunter, always on the prowl for tasty prey…

A homo sapiens with a big brain, gigantic insight, gift of gab and ability to draw and hold an avid audience.

What kind of crime/scene/action/character tugs at your cerebral head strings?

Thelma Jacqueline Straw
at 7:30 AM