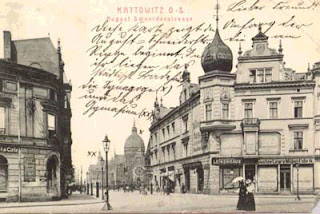 Finally made it to Katowice, not Krakow. Don’t ask me how to pronounce the name of this place we are in. It has about as many people as Newark, 300,000. It’s an old mining town, trying to resurrect itself by turning to service. They host the European Handball Championships soon. Here in the hotel are the National Hockey teams of Poland, Norway, South Korea and someone else. They are having a tournament. Finally, I can get some laundry done. Had a good old traffic jam at a toll booth on the way here. Progress. I think we are here because it is near Warsaw, where we are going to a Chopin concert. I am ashamed to know so little history. I think I could point out Poland on a blank map, but I know I could not point out Warsaw of Krakow, much less Katowice. The hotel is very nice, and you can get a lot for your good old American dollar, translated into the local currency, which is the zloty.

People are uniformly white and pale here, and I don’t think I have seen any fat people. Maybe it is because the portions at the meals are so small. I wonder how many zloty they will charge me for the coke I took from the mini-bar. We go to a salt mine today, and a brewery. Took a walk through the city last night—it was freezing. Found a mall very much like American malls. And a McDonalds. And a Foot Locker. This is what they have decided to adopt from us? The TV has English channels BBC News and CNN. The internet connection sucks. Goes in and out.

Looking forward to the brewery tour. Don’t know what there is to see at a salt mine. Salt? The treadmill is weird, as the speed is measured in kilometers per hour. The chicken wings are only nominally so. This is port city, on the Baltic, I think. Or the Black or the Caspian. Who can remember? People in Poland seem more friendly than in Rome. They had unisex bathrooms in Rome. Met a mother and daughter from Vancouver in the Munich Airport. The boy of the family was in the world hip hop championships. I didn’t know people from Canada knew what hip hop was. She said she was dismayed to see how America lets religion infect politics. I pointed out the George Bush took his marching orders directly from God, who was in the habit of calling him on the red phone. I wonder what the Pope thinks about that. The people in Rome were just wild about him. I told him, when he held a personal audience for me, to allow women to be priests, so my mother would stop carping about it.

Walked all around Katowice on a big tour. Our tour guide, Matteus, was saintly in his patience. My friend David kept asking him dumb questions, over and over. Believe me, there is such a thing as a dumb question. Or an irrelevant one. Or weird. Or all three. David is the same guy who objected to a clerk at the Vatican touching his post cards and getting thumbprints on them. That guy Don seems to have echolalia. He repeats everything the guide says, and then asks him if he has gotten in right. I’ve got only one English channel on the TV, BBC News, and boy is it depressing. Katowice is in Upper Silesia. Silesians, at least some, see themselves as separate from Poland, ethnically, culturally and even linguistically, and have a history of being taken advantage of, bullied, by the authorities, kind of like Poland itself has been bullied by Germany on the West and Russia on the East.

Matteus (no matter how many times he tells David how to say it, David butchers it) explained the difference between the Russians and the Prussians by saying the former drank vodka and didn’t like to work and the latter drank beer and did like to. We went to the old village where the coal miners lived. It looked bleak and Dickensian, sooty dark brick, filthy, depressing. Matteus says there is a mixture there of the poor and young artists trying to make their marks there, those with lives ahead of them, and those who feel like they never had one to begin with, maybe like Greenwich Village.

Two little kids, a toddler and his three or four year old sister, came to a window to stare at us. Anne, she of the Israeli husband, went to take a picture. I told her the mother of the filthy kids might not want to be the subject of a National Geographic documentary. The kids looked terrified and yet wild to make contact with something more than the grinding monotony of their poverty, or maybe their TV was just broken.