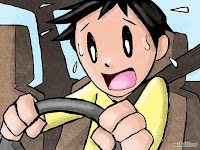 Yesterday fifteen or twenty of the girls from my class in high school met for the annual holiday party at Carpaccio's in Middlesex. I was happy to see them all. Most of us are still on our feet, which is an achievement in itself at our age, and all of us are still finding fun in life. The food was great as always. I passed up the cheesecake—all three flavors—and even the lemon sorbet, which came packed in the peel of an actual lemon, because after eating a full serving of tortellini in some kind of cream sauce I was stuffed.

Breaking with tradition, we had a lunch party instead of a dinner party. For some of us, driving at night is becoming difficult. For me, driving at all in that part of the world is enormously stressful. Those ladies are used to it, since most of them stayed around the old home town after graduation. But I'm used to Lambertville. Here I go as far as the store and back and that's pretty much it, except for the odd excursion to Flemington to see the doctor, or worse, to the far side of Princeton to see the endodontist.

What I mostly hate about driving in north central Jersey is the circles. The Somerville Circle is one of those circles of Hell that Dante used to write about. I will bear any burden, follow any route, to avoid the Somerville Circle. Before I leave on these trips to go see my old girlfriends I always sit down with several paper maps and an online direction service and plot a route that will let me avoid 1) the Somerville Circle and 2) any left turn across traffic. Don't ask me why. It might have something to do with an accident I had many years ago where a fellow ran into the driver's side door of my old Mazda. Man, that was two or three cars in the past. The cars come and go, but the psychological damage remains.

So I got busy and plotted a route this morning that would take me straight to Carpaccio's (it's on Route 28) without encountering any circles or otherwise hair-raising intersections and without going on the dreaded Route 22, where all the gung-ho drivers race along bumper to bumper. And my plan worked fine. Since it was daylight, I was able to see all the street signs. New Jersey roads are marked much better than, say, Pennsylvania roads. I came rolling up to the restaurant about the time that everybody else did, partied down, and had a fine time.

Then it was time to go home.

Do you think I could retrace my route, even with it written out in front of me in indelible marker on fluorescent pink sticky notes? I got lost three times. Once I found myself barreling along on Route 22, racing toward New York City. Hey, at least the sun wasn't right in my eyes anymore. That was my first clue that I wasn't headed west, by the way. Then I found myself—you guessed it!—staring into the maelstrom of the dreaded Somerville Circle.

Somehow I got through that without getting honked at or ploughed into. But I missed the way to Route 202, got lost again, found myself in one of those housing developments where you have to slow down to 15 miles an hour to keep from breaking an axle on the speed bumps, knowing that Route 202 was right over that way, only there wasn't a way there from where I was…

Well, you get the picture. Finally I got home. At this point I figure I have two choices: either I never go back there again, which would be too bad, because I would miss those ladies, or I make a point of going to Somerville, Bound Brook, and Middlesex once a week and just driving all over the place until I get used to it. Maybe I'll do that. Gas is cheap right now.